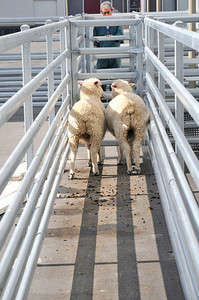 “. . . , researchers rustle up sheep behind the lab in Palmerston North, New Zealand, . . . ” Source of photo and caption: online version of the WSJ article quoted and cited below.

(p. A1) PALMERSTON NORTH, New Zealand — On a typical day, researchers in this college town coax hungry sheep into metal carts. They wheel the fluffy beasts into sealed chambers and feed them grass, then wait for them to burp.

The exercise is part of a global effort to keep sheep, deer, cows and other livestock from belching methane when they eat and regurgitate grass. Methane is among the most potent greenhouse gases, and researchers now believe livestock industries are a major contributor to climate change, responsible for more greenhouse-gas emissions than cars are, according to the United Nations.
Plenty of people, including farmers, think the problem of sheep burps is so much hot air. But governments are coming under pressure to put a cork in it, and many farmers fear that new livestock regulations could follow. They worry that environmentalists will someday persuade the U.S. Environmental Protection Agency to seek to tax bovine belches. Some activists are urging consumers to stop buying meat and thus slow climate change.
All of which is breathing new life into the study of sheep stomachs. Researchers have tried just about everything, from changing the animals’ diets to breeding new sheep they hope will be less gassy. They’ve concocted (p. A9) cocktails of clover, garlic and cottonseed oil to try to curb methane. They have even tried feeding the animals chloroform, which can stymie the production of gas if it doesn’t kill the animal.
But sure as grass grows, livestock keep producing methane.
. . .
. . . , roughly 48% of New Zealand’s greenhouse gases come from agriculture, compared with less than 10% in such large, developed economies as the U.S. Agricultural leaders fear their livestock-heavy economy could be at risk if there’s an international move to tighten rules on animal emissions.
Kiwis tried to get a leg up on the problem in 2003, when politicians proposed an emissions tax on livestock. Farmers thought they were getting fleeced and attacked what they called a “fart tax.” The idea was tabled. 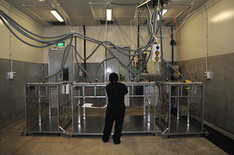 [Researchers place sheep] “in a cart to be wheeled into sealed chambers to measure levels of the greenhouse gas methane the animals burp up.”

Source of photos and caption: online version of the WSJ article quoted and cited above.