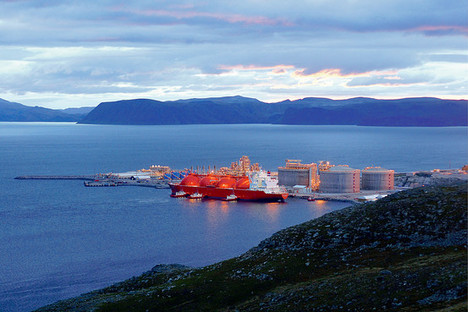 “Statoilhydro’s pioneering liquefied natural gas plant on an island off Hammerfest in Norway has encountered an array of problems.” Source of caption and photo: online version of the WSJ article quoted and cited below.

(p. B1) HAMMERFEST, Norway — A Norwegian oil company has gone to the ends of the earth — almost literally — to get at some of the world’s last untapped energy resources.

StatoilHydro ASA operates a pioneering venture deep inside the Arctic Circle, energy’s final frontier. The company pumps natural gas from under the freezing waters of the Barents Sea, cools it into a liquid and exports it to Europe and the U.S.

The project, called Snoehvit, has taken StatoilHydro and the entire oil and gas industry into uncharted territory. Before, no one had ever produced liquefied natural gas in the Arctic — or in Europe, for that matter.

. . .
The oil companies are being aided by climate change. Lashed by storms and strewn with icebergs, the Arctic is one of the most hostile environments on earth. But global warming is melting the polar ice cap, opening up new shipping routes and unlocking once-inaccessible mineral deposits.

. . .
(p. B4) StatoilHydro, . . . , is upbeat. The plant is currently running at 80% to 90% of capacity, up from around 60% last year, company officials say. Outages are typical for the run-in period of a big LNG project, and flaring will soon be a thing of the past. Sure, they say, the start-up period has been troubled, but this is a field with a production life of up to 40 years.

Source of graphic: online version of the WSJ article quoted and cited above.