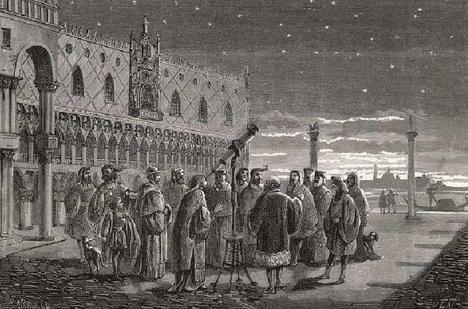 “. . ., the Italian astronomer shows the satellites of Jupiter to Venetian senators in this 1882 illustration.” Source of illustration and caption: online version of the WSJ article quoted and cited below.

(p. A9) A mathematician and experimental physicist, Galileo, however, immediately recognized that what he could see of Venus, Jupiter and the moon through his telescope offered crucial evidence that the sun, not Earth, was the center of our solar system. The evidence of his eyes overturned 2,000 years of accepted wisdom about cosmology in which philosophers had conceived the night sky as a system of crystalline spheres.

Moreover, Galileo quickly shared his observations with scientists throughout Europe by openly publishing his data.
“He wrought a change so fundamental for science and for humanity,” says Munich astronomer Pedro Russo, who is global coordinator of the International Year of Astronomy. “For the first time, we realized we were not the center of the universe.”
But his insistence on contradicting traditional cosmology led to his arrest and trial by the Roman Catholic Church. He was forced to recant his views and imprisoned for life. The Vatican did not formally admit that Galileo was correct until 1992. Now Vatican authorities are planning a statue in his honor.
During his life, Galileo is known to have built at least 100 telescopes, mostly as ornate presentation gifts for his patrons — the powerful Medici family of Florence. Only one is known to survive with its optics intact — the humble device now on show at the Franklin Institute.
“We assume it was personally used by Galileo,” says Paolo Galluzzi, director of the science museum in Florence, which loaned the telescope for the exhibit. “Only this one was found among his property at his death. We believe that this is one of the major tools of his work.”
. . .
“Science is fundamentally about establishing truth for yourself,” says Dr. Pompea in Arizona. “People can make observations, take data and establish for themselves the nature of the universe. They don’t have to take it from someone else or read it in a book.”
Like Galileo, “they can see it.”

“Galileo Galilei.” Source of image and caption: online version of the WSJ article quoted and cited above.

One thought on ““The Evidence of His Eyes Overturned 2,000 Years of Accepted Wisdom””