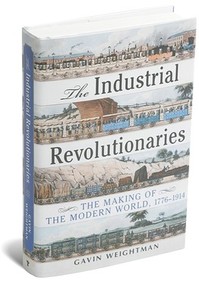 (p. W8) There are technologies and then there are technologies. Some are trivial, such as Ziploc plastic bags. They’re handy, to be sure, but they don’t change the world. Some are extraordinarily simple but profound, such as the stirrup, which came along only after men had been riding horses for well over a thousand years. Nothing more than a ring of metal hung from a leather strap, the stirrup made cavalry the dominant force on the European battlefield and therefore made the mounted knight the dominant force in European society for several hundred years.

As Gavin Weightman’s “The Industrial Revolutionaries” reminds us, inventions on the level of the stirrup’s importance seemed to come every other month during the late 18th and 19th centuries — what Mr. Weightman calls “the most remarkable period of practical inventiveness in world history.”
When Thomas Hobbes famously wrote in the 17th century that the great majority of the population led lives that were “nasty, brutish and short,” he was describing an agrarian society that was, in its essence, unchanged since the advent of agriculture about 10,000 years earlier. Ownership of land was the basis of wealth. Hobbes had no reason to think that the situation would change any time soon. But it did: A rapidly accelerating development of world-transforming technologies, subsumed under the rubric of “the Industrial Revolution,” began in Britain and within 100 years had molded the modern world.
. . .

The Industrial Revolution revolutionized more than just the global economy: It transformed politics and society. A world divided between a handful of aristocrats and millions of peasants was transformed into a world dominated by the middle class, where wealth is widely distributed and the franchise universal.

The book being reviewed, is:
Weightman, Gavin. The Industrial Revolutionaries: The Making of the Modern World 1776-1914. New York: Grove Press, 2009.