The clip is the famous corporate graveyard scene from Ben Wattenberg’s 1977 “In Search of the Real America: A Challenge to the Chorus of Failure and Guilt.” The scene appears in the first of 13 episodes, the episode called “There’s No Business Like Big Business” which received the Tuck Award for the Advancement of Economic Understanding. The episode was produced and written by Austin Hoyt.
The corporate graveyard scene illustrates that under entrepreneurial capitalism, companies prosper that innovate in better serving the consumer.

Wattenberg discussed the “In Search of the Real America” program, and the graveyard scene, in his recent book Fighting Words:

(p. 307) The central point of the program was that if big American corporations didn’t compete effectively, they suffer, and many would go out of business.

The producers had the wonderful idea of a visual of a graveyard on a foggy night, with headstones made from papier-mâché and a smoke machine providing the fog. I walked through the mock cemetery in a raincoat and read off the names of corporate tombstones, which included Central Leather (the seventeenth largest company in 1917), International Mercantile Marine (the eleventh largest in 1917), as well as failures like Baldwin Locomotive Works, American Woolen, Packard Motor Car, International Match, Pierce Petroleum, Curtiss-Wright, United Verde Mining, and Consolidation Coal.2 When we showed the Central Leather tombstone, a sound effect mooed; behind International Mercantile Marine’s, a steamship horn bellowed (I love shtick).
. . .
2 The program was based on an article by James Michaels, editor of Forbes. For many years, people would come up to me in airports, recalling that one scene and complementing me on the program.

Wattenberg, Ben J. Fighting Words: A Tale of How Liberals Created Neo-Conservatism. New York: Thomas Dunne Books, 2008.
(Note: ellipsis added.)
(Note: I have corrected a few obvious errors involving the omission and placement of commas in the list of companies in the text of Wattenberg’s Fighting book.)

. . . , Mr. Michaels graduated from Harvard in 1943 with a bachelor’s degree in economics.

Source:
RICHARD PÉREZ-PEÑA. “James Michaels, Longtime Forbes Editor, Dies at 86.” The New York Times (October 4, 2007).
(Note: of course, Joseph Schumpeter was a member of the Harvard faculty in 1943, and published the first edition of Capitalism, Socialism and Democracy in 1942.) 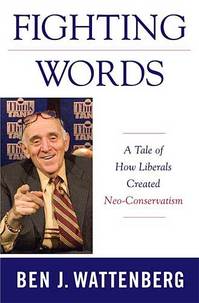