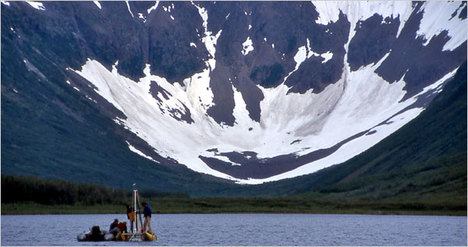 “Researchers use a floating platform to take sediment cores from Sunday Lake in southwestern Alaska.” Source of photo and caption: online version of the NYT article quoted and cited below.

(p. A17) The human-driven buildup of heat-trapping greenhouse gases in the atmosphere appears to have ended a slide, many millenniums in the making, toward cooler summer temperatures in the Arctic, the authors of a new study report.

Scientists familiar with the work, to be published Friday in the journal Science, said it provided fresh evidence that human activity is not only warming the globe, particularly the Arctic, but could also even fend off what had been presumed to be an inevitable descent into a new ice age over the next few dozen millenniums.
. . .
In the very long term, the ability to artificially warm the climate, particularly the Arctic, could be seen as a boon as the planet’s shifting orientation to the Sun enters a phase that could initiate the next ice age.
As a result of such periodic shifts, 17 ice ages are thought to have come and gone in two million years. The last ice age ended 11,000 years ago and the next one, according to recent research, could be 20,000 or 30,000 years off discounting any influence by humans. The last ice age buried much of the Northern Hemisphere under a mile or more of ice.
With humans’ clear and growing ability to alter the climate, Dr. Overpeck said, “we could easily skip the next opportunity altogether.”