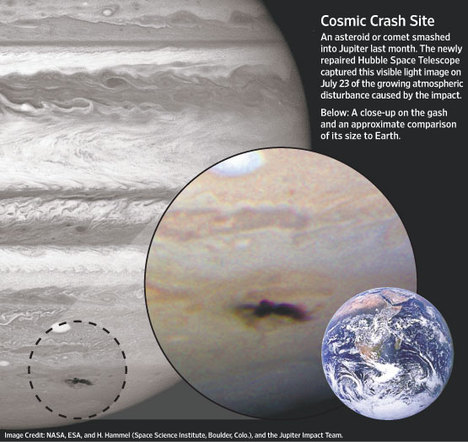 (p. A9) In a paradox of creation, new evidence suggests that devastating avalanches of cosmic debris may have fostered life on Earth, not annihilated it. If so, life on our planet may be older than scientists previously thought — and more persistent.

Astronomers world-wide have been transfixed by a roiling gash the size of Earth in the atmosphere of Jupiter, caused by an errant comet or asteroid that smashed into the gas giant last month. The lingering turbulence is an echo of a cataclysmic bombardment that shaped the origin of life here 3.9 billion years ago, when millions of asteroids, comets and meteors pummeled our planet.
. . .
But in their super-heated plunge through the atmosphere, these asteroids and meteors may have helped create conditions ideal for emerging life. “Everyone focuses on the meteor that hits the ground,” says geochemist Richard Court at London’s Imperial College. “No one thinks about the products of its journey that get pumped into the atmosphere.”
As they vented, they collectively could have imported billions of tons of life-sustaining water into the air every year, Dr. Court and his colleague Mark Sephton recently determined. They calculated that these showers of volatile rocks delivered 10 times the daily outflow of the Mississippi River every year for 20 million years. By analyzing the fumes emitted under such extreme heat, they discovered these rocks also could have injected billions of tons of carbon dioxide into the air every year.
Combined with so much water vapor, the carbon dioxide could have induced a global greenhouse effect. That could have kept any life emerging on Earth safely in a planetary incubator at a time when the planet might easily have frozen because the Sun radiated 25% less energy than today. “The amount of CO2 that was produced is about the same we produce today through fossil fuel use and we know that is a climate-changing volume,” says Dr. Court.
. . .
“It is literally a revolution in our ideas about how our solar system evolved,” says asteroid expert William Bottke at the Southwest Research Institute. “It could be that our form of life today — every living thing that we see today — is due to this bombardment that happened 3.9 billion years ago.”

(p. A13) Consider someone rushed into an emergency room in severe cardiac distress. After starting acute life-support measures, doctors still apply the rule stated by Galen of Pergamum more than 1,800 years ago: primum non nocere, or “First, do no harm.” Treatment interventions are selected carefully from a battery of technologies and potent drugs while recognizing that any one of them, or a combination, could hurt the patient if misapplied or given in the wrong dosage. Economic interventions require no less care.
. . .
Our economic doctors should permit America’s uniquely effective immune system to take over as companies and financial institutions deleverage their balance sheets. With people and with capitalism, the tincture of time is often the best medicine.

For the full commentary, see:
MICHAEL MILKEN and JONATHAN SIMONS. “Illness as Economic Metaphor; The first rule, as always, is do no harm..” The Wall Street Journal (Sat., June 20, 2009): A13.
(Note: italics in original; ellipsis added.) 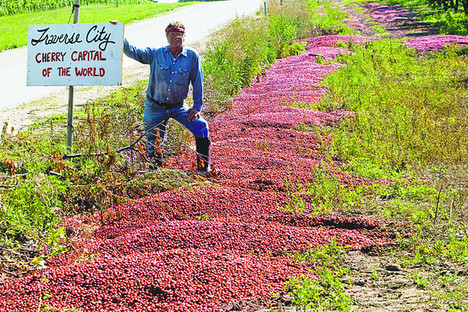 “Leonard Ligon, a farmer near Traverse City, Mich., stands in mounds of tart cherries that he had to dump because of a price-stabilization program. Mr. Ligon says he discarded 72,000 pounds of the crop.” Source of photo and caption: online version of the WSJ article quoted and cited below.

(p. A5) Farmers in Michigan and six other states are harvesting a bumper crop of tart cherries. But the bounty is turning out to be the pits for farmers whose fruit is rotting in orchards instead of bubbling in cherry pies.

Under a Depression-era federal program designed to keep prices from plummeting, tart-cherry farmers are being told by fruit processors to leave up to 40% of their crop unharvested.
“It’s kind of heartbreaking,” said Rob Manigold, a tart-cherry farmer near Traverse City, Mich. Michigan grows about 75% of all the tart cherries in the U.S.
. . .
The tart-cherry industry operates under a government-sanctioned plan called a federal marketing order that dates to 1933. It allows farmers and processors to legally regulate supply to keep prices stable. Other commodities that operate under similar programs include some types of dates, olives and kiwifruit.
. . .
This year, the industry board, a 18-member panel of growers and processors, determined that there were more than enough cherries in the fields to satisfy demand and to replenish the reserves. So the board limited how much processors can put on the market in the U.S. That leaves farmers with cherries they can’t sell and are left to rot.
Bern Kroupa, a 61-year-old fruit farmer outside Traverse City in Michigan’s northern lower peninsula, said this year he is going to let about a quarter of his crop — about 500,000 pounds — rot.
. . .
Leonard Ligon, another tart-cherry grower near Traverse City, Mich., generated a lot of local press last week when he dumped 72,000 pounds of cherries alongside a country road on his farm. “I wanted to make the public aware of the plight of the tart-cherry farmer,” he said. “I could call it a mulch pile.”

(p. A5) Some of the nation’s biggest food and agriculture companies are planning to release a flurry of studies in coming weeks that scrutinize the potential impact of climate-change legislation, warning that it could lead to higher food prices.
. . .
In a letter sent last month to Sens. Barbara Boxer, the California Democrat, and Republican James Inhofe of Oklahoma, the coalition said the House bill “will increase food and feed prices and reduce the international competitiveness of our businesses.”
The letter said Congress “must take extreme care to avoid adverse impacts on food security, prices, safety, and accessibility to necessary consumer products.” The letter also criticized the House bill for failing to provide transitional assistance to “low-income households struggling with rising food prices.”
When the group’s studies are released, possibly by the end of August, they are likely to reignite tensions between food and ethanol producers that have raged since 2007 when Congress passed energy legislation that gave a big boost to the corn-ethanol industry.
The food industry has complained that the energy bill pushed up prices for corn and other key food ingredients that resulted in higher consumer prices as the ethanol industry siphoned more corn to make ethanol. 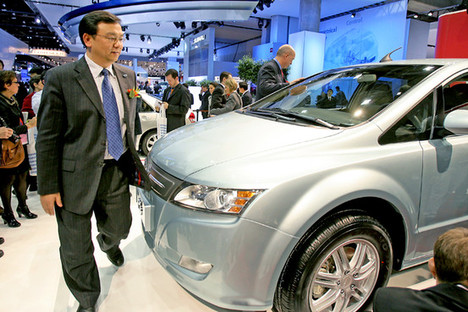 “Wang Chuanfu, the chairman of Chinese auto maker BYD, with one of the company’s cars at the automobile show in Detroit in January.” Source of photo and caption: online version of the WSJ article quoted and cited below.

(p. B5) XIAN, China — BYD Co., the Chinese auto maker part-owned by Warren Buffett’s company, is finalizing plans for an all-electric battery car that would be sold in the U.S. next year, ahead of the original schedule, Chairman Wang Chuanfu said.
. . .
One source of Mr. Wang’s confidence in attacking the U.S. car market is BYD’s ties with MidAmerican Energy Holding Co., the unit of Mr. Buffett’s Berkshire Hathaway Inc. that paid about $230 million for a 9.9% stake in BYD.
MidAmerican Chairman David Sokol, who was also interviewed in Xian, said MidAmerican is ready to assist BYD’s foray into the U.S. auto market in “any way we could be helpful.” MidAmerican also might invest in BYD’s new initiatives in the U.S., which, in addition to automobiles, could involve solar panels and battery technology for power utilities.
Mr. Sokol also said MidAmerican hopes to boost its BYD stake if the chance arises. “If in the future there is an opportunity for us to continue to invest in BYD, we will be happy to increase our stake over time, but we will do it in cooperation with BYD,” he said. Mr. Wang said an increase is “negotiable.”

(p. B1) President Obama has cast himself as a reluctant interventionist in two of the nation’s major industries, Wall Street and Detroit. The federal aid, he says, is a financial bridge to a postcrisis future and the hand-holding will be temporary.

Even so, the scale of the government investment and control — especially by the auto task force now vetting plans at Chrysler and General Motors — points to an approach that has been shunned by the United States more than other developed nations.
“By any coherent definition, this is industrial policy,” said Marcus Noland, a senior fellow at the Peterson Institute for International Economics.
. . .
(p. B7) . . . a more comprehensive, industrial-policylike approach to Detroit carries its own perils, economists say. In trying to manage the industrial shrinkage, they say, there is a fine line between easing the social impact and protecting jobs in ways that inhibit economic change and renewal. In pursuit of new growth, governments risk encouraging overinvestment in areas that prove to be technological dead ends.
In the Japanese experience, economists see evidence of both dangers. Problems, they say, are typically byproducts of what economists call “political capture.” That is, an industrial sector earmarked for special government attention builds up its own political constituency, lobbyists and government bureaucrats to serve that industry. They slow the pace of change, and an economy becomes less nimble and efficient as a result.
Economists say the phenomenon is scarcely confined to nations with explicit industrial policies and cite the history of agricultural subsidies in America or military procurement practices.
But going down the path of industrial policy certainly holds that risk. “You have to bear in mind the opportunity costs of these kinds of government interventions, and remember that life is not an economic textbook and that politics can easily override economic rationality,” said Mr. Noland, an author, with Howard Pack, of “Industrial Policy in an Era of Globalization: Lessons From Asia.”

For the full story, see:
STEVE LOHR. “Highway to the Unknown; Forays in Industrial Policy Bring Risks.” The New York Times (Weds., May 19, 2009): B1 & B7.
(Note: the online title is “In U.S., Steps Toward Industrial Policy in Autos.”)
(Note: ellipses added.)
The full reference to Noland and Pack’s book is:
Noland, Marcus, and Howard Pack. Industrial Policy in an Era of Globalization: Lessons from Asia, Policy Analyses in International Economics. Washington, D.C.: Peterson Institute, 2003.

(p. B6) Both Nissan and Mitsubishi have their own reasons for rushing out an all-electric car. Having invested little in hybrids, they hope to leapfrog straight to the next technology.
. . .
“You don’t see many competing technologies survive in a key market for very long,” said Mr. Shimizu, the Keio University professor.
And more often than not in the history of innovation, a change in the dominant technology means a change in the market leader.
“Electric cars are a disruptive technology, and Toyota knows that,” Mr. Shimizu said. “I wouldn’t say Toyota is killing the electric vehicle. Perhaps Toyota is scared.”

For the full story, see:
HIROKO TABUCHI. “The Electric Slide.” The New York Times (Thursday, August 20, 2009): B1 & B6.
(Note: The online version of the article had the title: “Toyota, Hybrid Innovator, Holds Back in Race to Go Electric.”)
(Note: ellipsis added.)