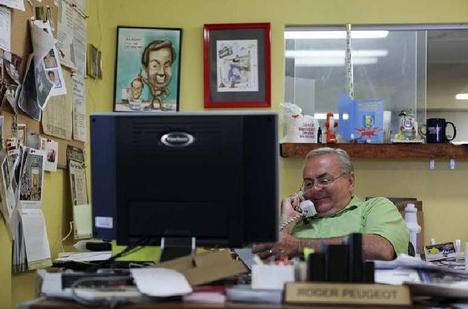 “‘Roger the Plumber’ owns his own business and is excited to go to work every day.” Source of caption and photo: online version of the WSJ article quoted and cited below.

(p. D1) By economic yardsticks, Roger the Plumber should be feeling pretty low. Roger Peugeot, owner of the 14-employee Overland Park, Kan., plumbing company that bears his name, is part of a sector hit hard by shrunken credit and slumping sales. He has been forced to reduce staff and is battling new competition from other plumbers fleeing the construction industry.

So why is Mr. Peugeot so happy? He genuinely likes fixing plumbing messes, for one thing, and despite the worst recession he has seen, “I’m still excited to get up and go to work every day,” he says. He relishes running into people at the local hardware store whom he has helped in the past. And in hard times, he says, his fate is in his own hands, rather than those of a manager. “Even when things get tough, I’m still in control,” he says.
In the broadest, most-comprehensive survey yet of how occupation affects happiness, business owners outrank 10 other occupational groups in overall well-being, based on the landmark survey of 100,826 working adults set for release today. Defined as self-employed store or factory owners, plumbers and so on, business owners surpassed 10 other occupational groups on a composite measure of six criteria of contentment, including emotional and physical health, job satisfaction, healthy behavior, access to basic needs and self-reports of overall life quality.
This puts Roger the Plumber well ahead of movers and shakers typically regarded as the top of the heap in society–professionals such as doctors or lawyers, who ranked second, and executives and managers in corporations or government, who came in third–according to the Gallup-Healthways Well-Being Index, a collaboration between Gallup and Healthways, a Franklin, Tenn., health-management concern. This is despite business owners ranking below those more-prestigious occupations in physical health and access to basic needs, such as health care.
. . .
“Despite the recession, it still pays to be your own boss,” says Frank Newport, editor in chief of the Gallup Poll. The survey, adds John Howard, director of the National Institute for Occupational Safety and Health, “reaffirms my view that the more control you have over your work, the happier you are.”