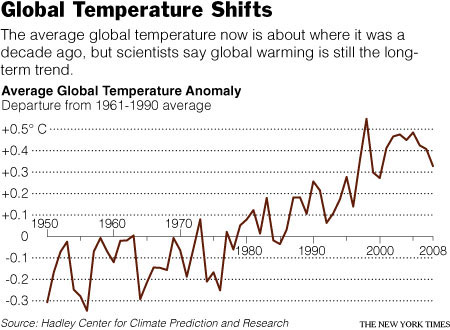 (p. A10) The world leaders who met at the United Nations to discuss climate change on Tuesday are faced with an intricate challenge: building momentum for an international climate treaty at a time when global temperatures have been relatively stable for a decade and may even drop in the next few years.

The plateau in temperatures has been seized upon by skeptics as evidence that the threat of global warming is overblown. And some climate experts worry that it could hamper treaty negotiations and slow the progress of legislation to curb carbon dioxide emissions in the United States.
. . .

Underscoring just how little clarity there is on short-term temperature fluctuations, researchers from Britain’s climate change office, in a paper published in August, projected “an end to this period of relative stability,” with half the years between now and 2015 exceeding the record-setting global temperatures of 1998.
Whatever the next decade may hold, critics of global warming have lost no time in using the current temperature plateau to build their case.
“I think it supports the arguments of those who’ve said, ‘What’s the rush for policy on this issue?’ ” said Patrick J. Michaels, a climatologist affiliated with George Mason University and the Cato Institute, a group opposing most regulatory solutions to environmental problems.
. . .

A clearer view of whether the recent temperature plateau undermines arguments for dangerous climate change in the long run should come in a few years, as the predictions made by the British climate researchers are tested. Their paper appeared in a supplement to an August issue of The Bulletin of the American Meteorological Society.
While the authors concluded that there was a 1 in 8 chance of having a decade-long pause in warming like the current plateau, even with rising concentrations of greenhouse gases, the odds of a 15-year pause, they wrote, are only 5 in 100. As a result, the next few years of observations could tip the balance toward further concern or greater optimism.
Meanwhile, social scientists who study the way people understand and respond to environmental problems say it is not surprising that the current temperature stability has created confusion and apathy.

For the full story, see:
ANDREW C. REVKIN. “Plateau in Temperatures Adds Difficulty to Task of Reaching a Solution.” The New York Times (Weds., Sept. 23, 2009): A10.
(Note: the online version lists a date of September 21 and has the title as “Momentum on Climate Pact Is Elusive”, but the body of the article seems to be the same as the print version.)
(Note: ellipses added.)