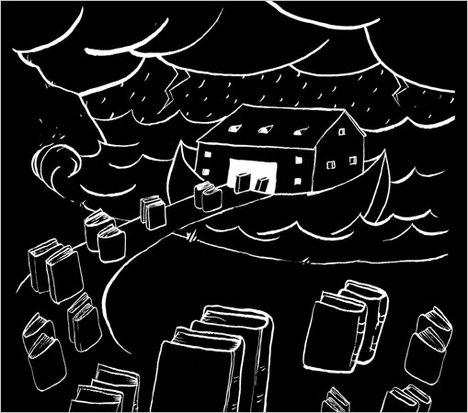 Source of cartoon: online version of the NYT commentary quoted and cited below.

(p. A25) . . . the vast majority of books ever written are not accessible to anyone except the most tenacious researchers at premier academic libraries. Books written after 1923 quickly disappear into a literary black hole. With rare exceptions, one can buy them only for the small number of years they are in print. After that, they are found only in a vanishing number of libraries and used book stores. As the years pass, contracts get lost and forgotten, authors and publishers disappear, the rights holders become impossible to track down.

Inevitably, the few remaining copies of the books are left to deteriorate slowly or are lost to fires, floods and other disasters. While I was at Stanford in 1998, floods damaged or destroyed tens of thousands of books. Unfortunately, such events are not uncommon — a similar flood happened at Stanford just 20 years prior. You could read about it in The Stanford-Lockheed Meyer Library Flood Report, published in 1980, but this book itself is no longer available.
Because books are such an important part of the world’s collective knowledge and cultural heritage, Larry Page, the co-founder of Google, first proposed that we digitize all books a decade ago, when we were a fledgling startup. At the time, it was viewed as so ambitious and challenging a project that we were unable to attract anyone to work on it. But five years later, in 2004, Google Books (then called Google Print) was born, allowing users to search hundreds of thousands of books. Today, they number over 10 million and counting.
. . .
In the Insurance Year Book 1880-1881, which I found on Google Books, Cornelius Walford chronicles the destruction of dozens of libraries and millions of books, in the hope that such a record will “impress the necessity of something being done” to preserve them. The famous library at Alexandria burned three times, in 48 B.C., A.D. 273 and A.D. 640, as did the Library of Congress, where a fire in 1851 destroyed two-thirds of the collection.
I hope such destruction never happens again, but history would suggest otherwise. More important, even if our cultural heritage stays intact in the world’s foremost libraries, it is effectively lost if no one can access it easily. Many companies, libraries and organizations will play a role in saving and making available the works of the 20th century. Together, authors, publishers and Google are taking just one step toward this goal, but it’s an important step. Let’s not miss this opportunity.