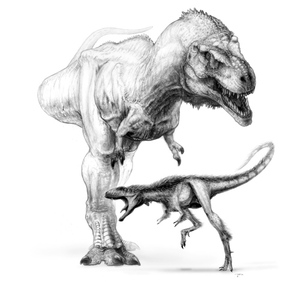 (p. A5) Paleontologists said Thursday that they had discovered what amounted to a miniature prototype of Tyrannosaurus rex, complete with the oversize head, powerful jaws, long legs — and, as every schoolchild knows, puny arms — that were hallmarks of the king of the dinosaurs.

But this scaled-down version, which was about nine feet long and weighed only 150 pounds, lived 125 million years ago, about 35 million years before giant Tyrannosaurs roamed the earth. So the discovery calls into question theories about the evolution of T. rex, which was about five times longer and almost 100 times heavier.
“The thought was these signature Tyrannosaur features evolved as a consequence of large body size,” Stephen L. Brusatte of the American Museum of National History, an author of a paper describing the dinosaur published online by the journal Science, said at a news conference. “They needed to modify their entire skeleton so they could function as a predator at such colossal size.”
The new dinosaur, named Raptorex kriegsteini, “really throws a wrench into this observed pattern,” Mr. Brusatte said.