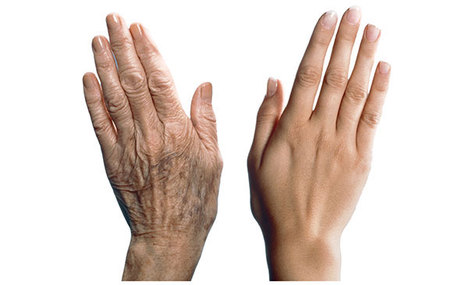 Source of photo: online version of the NYT article quoted and cited below.

(p. D1) It may be the ultimate free lunch — how to reap all the advantages of a calorically restricted diet, including freedom from disease and an extended healthy life span, without eating one fewer calorie. Just take a drug that tricks the body into thinking it’s on such a diet.

It sounds too good to be true, and maybe it is. Yet such drugs are now in clinical trials. Even if they should fail, as most candidate drugs do, their development represents a new optimism among research biologists that aging is not immutable, that the body has resources that can be mobilized into resisting disease and averting the adversities of old age.
This optimism, however, is not fully shared. Evolutionary biologists, the experts on the theory of aging, have strong reasons to suppose that human life span cannot be altered in any quick and easy way. But they have been confounded by experiments with small laboratory animals, like roundworms, fruit flies and mice. In all these species, the change of single genes has brought noticeable increases in life span.
With theorists’ and their gloomy predictions cast in the shade, at least for the time being, experimental biologists are pushing confidently into the tangle of linkages that evolution has woven among food intake, fertility and life span. “My rule of thumb is to ignore the evolutionary biologists — they’re constantly telling you what you can’t think,” Gary Ruvkun of the Massachusetts General Hospital remarked this June after making an unusual discovery about longevity.
Excitement among researchers on aging has picked up in the last few years with the apparent convergence of two lines of inquiry: single gene changes and the diet known as caloric restriction.
. . .
In the view of evolutionary biologists, the life span of each species is adapted to the nature of its environment. Mice live at most a year in the wild because owls, cats and freezing to death are such frequent hazards. Mice with genes that allow longer life can rarely be favored by natural selection. Rather, the mice that leave the most progeny are those that devote resources to breeding at as early an age as possible.
According to this theory, if mice had wings and could escape their usual predators, natural selection ought to favor longer life. And indeed the maximum life span of bats is 3.5 times greater than flightless mammals of the same size, according to research by Gerald S. Wilkinson of the University of Maryland.
In this view, cells are so robust that they do not limit life span. Instead the problem, especially for longer-lived species, is to keep them under control lest they cause cancer. Cells have not blocked the evolution of extremely long life spans, like that of the bristlecone pine, which lives 5,000 years, or certain deep sea corals, whose age has been found to exceed 4,000 years.
Some species seem to be imperishable. A tiny freshwater animal known as a hydra can regenerate itself from almost any part of its body, apparently because it makes no distinction between its germ cells and its ordinary body cells. In people the germ cells, the egg and sperm, do not age; babies are born equally young, whatever the age of their parents. The genesis of aging was the division of labor in the first multicellular animals between the germ cells and the body cells.
That division put the role of maintaining the species on the germ cells and left the body cells free to become specialized, like neurons or skin cells. But in doing so the body cells made themselves disposable. The reason we die, in the view of Thomas Kirkwood, an expert on the theory of aging, is that constant effort is required to keep the body cells going. “This, in the long run, is unwarranted — in terms of natural selection, there are more important things to do,” he writes.
All that seems clear about life span is that it is not fixed. And if it is not fixed, there may indeed be ways to extend it.

For the full story, see:
NICHOLAS WADE. “Tests Begin on Drugs That May Slow Aging.” The New York Times (Tues., August 18, 2009): D1 & D?.
(Note: ellipsis added.)
(Note: thanks to Luis Locay for calling my attention to the article quoted above.)