(p. 4) The border guards, bereft of instruction from the command system that had trained them to defend this barrier with their lives, plainly did not know what to do. Some stood silent, others engaged in conversation with the crowd; what they did not do was what they ordinarily would have done: Drive them away.

Eventually, the good-natured crowd — “we just want to go and drink a beer over there; tomorrow we’ll be at work!” shouted one man — was allowed into a forecourt. West Berlin seemed tantalizingly close. But then the commander of the Eastern checkpoint sent them away, saying they would have to get visas the next morning from local police stations.
By contrast, I was spotted by the commander taking notes. Unmasked as a Western reporter working without authorization in a border area of the German Democratic Republic, I was declared persona non grata and shoved into a small corridor that led to a passport check and the door into West Berlin. And it was in that narrow passage that I met Angelika Wachs.
Whispering “Ja-a-a-a!” and smiling broadly, she had somehow squeezed in behind me, and had almost nothing of the scared reticence common to most East Germans. A pimply young man, barely in his 20s, sat at passport control. He looked at my British passport, and then at Angelika’s papers, which somehow bore a rare stamp permitting her to visit West Berlin. But it was only valid Nov. 17, he objected. I urged him to consider what was happening. He shrugged. He pressed the switch to open the door. We tumbled through.
It was the only moment in my life when I pinched myself to see if I was dreaming. I had just crossed Checkpoint Charlie with this stranger, a woman exactly my age, 34, a citizen of Communist East Germany.
There were only a handful of West Berliners on hand to cheer our arrival. Shouting that it was “unglaublich,” or unbelievable, Angelika ran off to seek a ride to a friend who had escaped west years earlier, and I headed for a cheap bar where I glommed on to that precious commodity, a telephone.
. . .

. . . Americans, unlike Europeans, do not dwell much on the past. Tomorrow is always another day, and yesterday’s lessons fade.
Not so the story of Angelika Wachs. Once I found her name in the long-lost articles, it did not take many minutes on the Internet to track her down. She e-mailed; this past Saturday, we talked. I discovered that she had that precious stamp that night because, some years earlier, her parents had fled west, and she had been granted permission to visit. When we met, she had been working in administration at the Staatsoper, the state opera; her career has continued in P.R.
Ten years ago, she met an Englishman. They married this year, she said, on the deliberately chosen date of July 4 — “a way to mark independence, and freedom.” On Nov. 16, when a conference takes me to Berlin and a gleaming hotel among the skyscrapers that now fill Potsdamer Platz, we will meet for the drink we never had 20 years ago.

For the full story, see:
ALISON SMALE. “When the Future Swung Open in Berlin.” The New York Times, Week in Review Section (Sun., November 8, 2009): 4.
(Note: ellipses added.)
(Note: the online version of the article is dated Nov. 6, and has the title “Chasing the Story on a Night That Changed All .”) 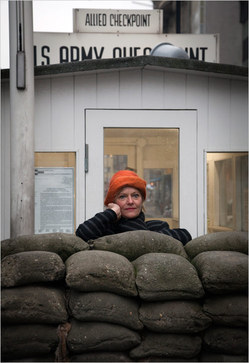 “20 Years; Angelika Wachs posed last week at Checkpoint Charlie, remembering the jubilation on the Wall’s western side on Nov. 10, 1989.” Source of caption and photo: online version of the NYT article quoted and cited above.