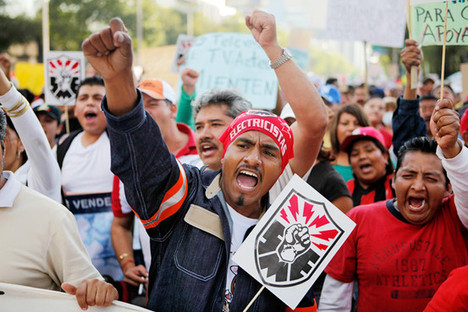 “The Mexican Union of Electricians protests the government’s decision to liquidate the state-owned electricity company in Mexico City.” Source of caption and photo: online version of the WSJ article quoted and cited below.

(p. A19) Eight days ago, just after midnight on a Sunday morning, Mexican President Felipe Calderón instructed federal police to take over the operations of the state-owned electricity monopoly, Luz y Fuerza del Centro (LyFC), which serves Mexico City and parts of surrounding states. The company’s assets will stay in the hands of the government but will now be run by the Federal Electricity Commission (CFE), a national state-owned utility and the major supplier of LyFC’s energy.

The net effect of the move is to dethrone 42,000 members of the Mexican Union of Electricians, which had won benefits over the decades to make Big Three auto workers in Detroit blush. When the liquidation is complete, it is expected that the company will employ about 8,000. To appreciate the magnitude of Mr. Calderón’s decision, think of Ronald Reagan’s firing of the air traffic controllers–only bigger. As one internationally renowned Mexican economist remarked on Sunday, it is “the most important act of government in 20 years.”