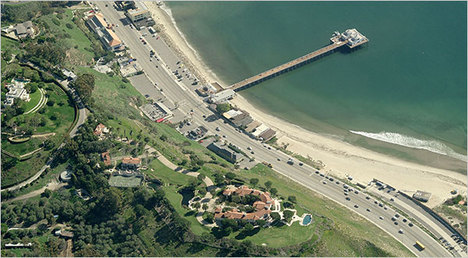 “The $35 million estate belonging to Teodoro Nguema Obiang, the agriculture minister of Equatorial Guinea and the son of its ruler, in Malibu, Calif., in the lower center of the frame.” Source of caption and photo: online version of the NYT article quoted and cited below.

(p. A1) Several times a year, Teodoro Nguema Obiang arrives at the doorstep of the United States from his home in Equatorial Guinea, on his way to his $35 million estate in Malibu, Calif., his fleet of luxury cars, his speedboats and private jet. And he is always let into the country.

The nation’s doors are open to Mr. Obiang, the forest and agriculture minister of Equatorial Guinea and the son of its president, even though federal law enforcement officials believe that “most if not all” of his wealth comes from corruption related to the extensive oil and gas reserves discovered more than a decade and a half ago off the coast of his tiny West African country, according to internal Justice Department and Immigration and Customs Enforcement documents.
And they are open despite a federal law and a presidential proclamation that prohibit corrupt foreign officials and their families from receiving American visas. The measures require only credible evidence of corruption, not a conviction of it.
Susan Pittman, a spokeswoman for the Bureau of International Narcotics and Law Enforcement in the State Department, said she was prohibited from discussing specific visa decisions. But other former and current State Department officials said Equatorial Guinea’s close ties to the American oil industry were the reason for the lax enforcement of the law. Production of the country’s nearly 400,000 barrels of oil a day is dominated by American companies like ExxonMobil, Hess and Marathon.
“Of course it’s because of oil,” said John Bennett, the United States ambassador to Equatorial Guinea from 1991 to 1994, adding that Washington has turned a blind eye to the Obiangs’ corruption and repression because of its dependence on the country for natural resources. He noted that officials of Zimbabwe are barred from the United States.
“Both countries are severely repressive,” said Mr. Bennett, who is now a senior foreign affairs officer for the State Department in Baghdad. “But if Zimbabwe had Equatorial Guinea’s oil, Zimbabwean officials wouldn’t still be blocked from the U.S.”
Shown the Justice Department (p. A19) documents that detail the accusations of corruption against Mr. Obiang, Senator Patrick J. Leahy, a Vermont Democrat who wrote the law restricting visas, expressed frustration and anger with the State Department, which is responsible for issuing visas.
“The fact that someone like Mr. Obiang continues to travel freely here suggests strongly that the State Department is not yet applying the law as vigorously as Congress intended,” Mr. Leahy said. The law was partly inspired by the accusations of corruption surrounding Mr. Obiang’s family and the Equatorial Guinean government, Mr. Leahy’s staff said.
“There are many instances of corrupt foreign officials plundering the natural resources of their countries for their own use while their people starve,” Mr. Leahy said. “The law states clearly that if you do that, you are no longer welcome in the United States.”