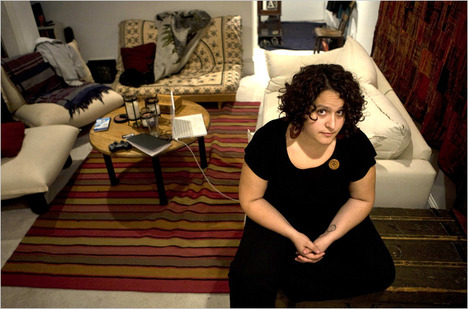 “Amelia Frank-Vitale, a former union organizer, said the practice of pink sheeting sent her into therapy.” Source of caption and photo: online version of the NYT article quoted and cited below.

(p. B1) After six years working in the laundry of a Miami hotel, Julia Rivera was thrilled when her union tapped her to become a full-time union organizer.

But her excitement soon turned to outrage.
Ms. Rivera said her supervisors at Unite Here, the hotel and restaurant workers’ union, repeatedly pressed her to reveal highly personal information, getting her to divulge that her father had sexually abused her.
Later, she said, her supervisors ordered her to recount her tale of abuse again and again to workers they were trying to unionize at Tampa International Airport, convinced that Ms. Rivera’s story would move them, making them more likely to join the union.
“I was scared not to do what they said,” said Ms. Rivera, adding that she resented being pressured to disclose intimate information and then speak about it in public. “To me, it was sick. It was horrible.”
Ms. Rivera and other current and former Unite Here organizers are speaking out against what they say is a longstanding practice in which Unite Here officials pressured subordinates to disclose sensitive personal information — for example, that their mother was an alcoholic or that they were fighting with their spouse.
More than a dozen organizers said in interviews that they had often been pressured to detail such personal anguish — sometimes under the threat of dismissal from their union positions — and that their supervisors later used the information to press them to comply with their orders.
“It’s extremely cultlike and extremely manipulative,” said Amelia Frank-Vitale, a Yale graduate and former hotel union organizer who said these practices drove her to see a therapist.
Several organizers grew incensed when they discovered that details of their history had been put into the union’s database so that supervisors could use that information to manipulate them.
“This information is extremely personal,” said Matthew Edwards, an organizer who had disclosed that he was from a broken home and was overweight when young. “It is catalogued and shared throughout the whole organizing department.”
. . .
(p. B5) Several organizers likened pink sheeting to a practice that Cesar Chavez, former president of the United Farm Workers, used when he embraced a mind-control practice developed by Synanon, a drug rehabilitation center founded in Santa Monica, Calif. Union staff members were systematically subjected to intense, prolonged verbal abuse in an effort to break them down and assure loyalty.
. . .
Ms. Frank-Vitale, now a graduate student at American University, says she is still haunted by memories of pink sheeting.
“One night my supervisor pushed me and pushed me, and I started talking about being an overweight woman in America, what that was like in high school, that it was very difficult for me,” she said. “I felt kind of violated.”