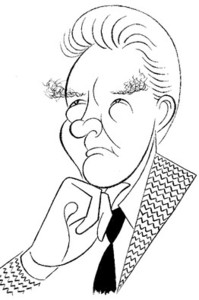 (p. D6) Now, at 81 and after years of producing enormous, compulsively readable history books, Mr. Johnson has just written what, at 192 pages, is probably the shortest biography of Winston Churchill ever published.
. . .
He gives credit to his success as a historian to his simultaneous and successful career in journalism. “You learn all sorts of tools as a journalist that come in extremely useful when you’re writing history,” he tells me as we sit in the drawing room of the West London house he shares with his wife, Marigold, “and one is the ability to condense quite complicated events into a few short sentences without being either inaccurate or boring. And of course a lot of the best historians were also journalists.”
. . .
The book includes refutations of many of the negative myths that have grown up around Churchill. For instance, that he was drunk for much of World War II. “He appeared to drink much more than he did,” Mr. Johnson insists. “He used to sip his drinks very, very slowly, and he always watered his whisky and brandy.”
Mr. Johnson certainly does not agree with the often-echoed criticism made by Prime Minister Stanley Baldwin that Churchill had every gift except judgment: “He made occasional errors of judgment because he made so many judgments–some of them were bound to be wrong! . . . On the whole, his judgment was proved to be right. He was right before the First World War in backing a more decent civilized society when he and Lloyd George created the elements of old-age pensions and things like that. He was right about the need to face up to Hitler and he was right about the Cold War that the Russians had to be resisted and we had to rearm.”
He is convinced that “Churchill was more than half American . . . all of his real qualities generally come from his mother’s side.” And despite Mr. Johnson’s own Oxford education (he was there with Margaret Thatcher), he believes that Churchill benefited from never having gone to college: “He never learned any of the bad intellectual habits you can pick up at university, and it explains the extraordinary freshness with which he came to all sorts of things, especially English literature.”

For the full conversation, see:
JONATHAN FOREMAN. “A Cultural Conversation with Paul Johnson; Winston Churchill, Distilled.” The Wall Street Journal (Thurs., DECEMBER 10, 2009): D6.
(Note: the online version of the interview is dated DECEMBER 11, 2009.)
(Note: ellipses within paragraphs were in the original; ellipses between paragraphs were added.)