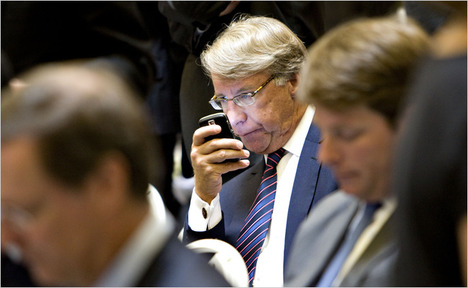 “James Chanos made his hedge fund fortune predicting problems at companies and shorting their stock.” Source of caption and photo: online version of the NYT article quoted and cited below.

Chanos’ views discussed below are plausible and worth taking seriously. Earlier and overlapping worries about the sustainability of China’s boom were expressed in a credible and scary book by David Smick called The World is Curved.
In addition to some of the concerns expressed by Chanos, Smick also emphasizes that China’s restrictions on the internet will dampen the ability of its entrepreneurs to succeed. That view seems prescient given China’s growing attempts to censor the internet and to hack Google.

(p. B1) SHANGHAI — James S. Chanos built one of the largest fortunes on Wall Street by foreseeing the collapse of Enron and other highflying companies whose stories were too good to be true.

Now Mr. Chanos, a wealthy hedge fund investor, is working to bust the myth of the biggest conglomerate of all: China Inc.
As most of the world bets on China to help lift the global economy out of recession, Mr. Chanos is warning that China’s hyperstimulated economy is headed for a crash, rather than the sustained boom that most economists predict. Its surging real estate sector, buoyed by a flood of speculative capital, looks like “Dubai times 1,000 — or worse,” he frets. He even suspects that Beijing is cooking its books, faking, among other things, its eye-popping growth rates of more than 8 percent.
“Bubbles are best identified by credit excesses, not valuation excesses,” he said in a recent appearance on CNBC. “And there’s no bigger credit excess than in China.” He is planning a speech later this month at the University of Oxford to drive home his point.
. . .
(p. B4) . . . he is tagging along with the bears, who see mounting evidence that China’s stimulus package and aggressive bank lending are creating artificial demand, raising the risk of a wave of nonperforming loans.
“In China, he seems to see the excesses, to the third and fourth power, that he’s been tilting against all these decades,” said Jim Grant, a longtime friend and the editor of Grant’s Interest Rate Observer, who is also bearish on China. “He homes in on the excesses of the markets and profits from them. That’s been his stock and trade.”
Mr. Chanos declined to be interviewed, citing his continuing research on China. But he has already been spreading the view that the China miracle is blinding investors to the risk that the country is producing far too much.
“The Chinese,” he warned in an interview in November with Politico.com, “are in danger of producing huge quantities of goods and products that they will be unable to sell.”

For the full story, see:
DAVID BARBOZA. “Shorting China: the Man Who Predicted Enron’s Fall Sees a Bigger Collapse Ahead.” The New York Times (Fri., January 8, 2010): B1 & B5.
(Note: the online version of the article has the title “Contrarian Investor Sees Economic Crash in China” and is dated January 7, 2010.)
(Note: ellipses added.)

The reference to the Smick book is:
Smick, David M. The World Is Curved: Hidden Dangers to the Global Economy. New York: Portfolio Hardcover, 2008. 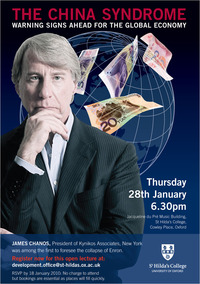 “Now Mr. Chanos is betting against China, and is promoting his view that the China miracle has blinded investors to the risks in that economy.” Source of caption and poster: online version of the NYT article quoted and cited above.