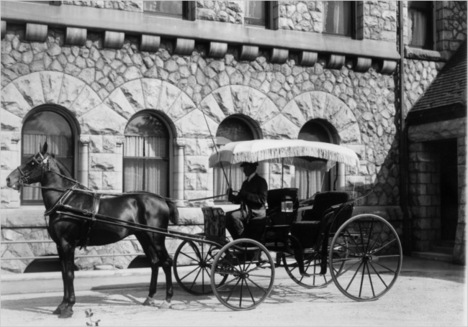 “Collection of Studebaker National Museum, South Bend, Ind.” “Those who disparage buggies as a dead end forget Studebaker switched from carriages to cars.” Source of caption and photo: online version of the NYT article quoted and cited below.

(p. 4) I spoke recently about buggy whips with Thomas A. Kinney, an assistant professor of history at Bluefield College in Virginia and author of “The Carriage Trade: Making Horse-Drawn Vehicles in America.”

There were 13,000 businesses in the wagon and carriage industry in 1890, Mr. Kinney said. A company survived not by conceiving of itself as being in the “personal transportation” business, but by commanding technological expertise relevant to the automobile, he said. “The people who made the most successful transition were not the carriage makers, but the carriage parts makers,” he said, some of whom are still in business.
One is the giant Timken Company, whose signature products, roller bearings, were first used in wagon wheels in the 1890s. They easily adapted to the automobile because they could be applied “to nearly anything that moved,” Mr. Kinney wrote.
Westfield, Mass., still known as “Whip City,” once had more than 40 businesses that made whips, tools and carriage parts. Today, only Westfield Whip Manufacturing, founded in 1884, remains. Although it produces buggy whips — now called carriage whips — most of its whips and crops, called “bats,” are for equestrian activities like dressage and jumping.
Buggy whips, with their long, rigid handles and flexible end lashes, were created by braiding fiber around a hard core and had no automotive analog.
The carriage makers did, and they tried their best to remake themselves into automakers. But they were expert woodworkers without expertise in precision metalworking, Mr. Kinney said: “Bicycle manufacturers were actually better suited for auto manufacturing than were carriage makers.”
Businesses do die, even big ones. Leslie Hannah, a visiting professor of economic history at the London School of Economics, studied the 100 largest industrial companies in the world between 1912 and 1995. Almost half of them disappeared, “and more than a quarter experienced bankruptcy or a similar close shave with it,” he wrote in “Learning by Doing in Markets, Firms and Countries.”
The standout carriage business that succeeded was the Studebaker Brothers Manufacturing Company, which began as a blacksmith shop in 1852 and had the financial resources to acquire smaller companies that supplied it with the precision metalworking expertise it lacked when it decided to enter the auto business. In 1913, its automobile production was second only to that of Ford Motor.