Source of the table: online version of the NYT article quoted and cited below.

(p. B1) Call it the mystery of the European sugar triangle.

It began when Belgian customs officials examined shipping records for dozens of giant tanker trucks that outlined an odd, triangular journey across Europe. The trucks, each carrying 22 tons of liquid sugar, swung through eight nations and covered a driving distance of roughly 2,500 miles from a Belgian sugar refinery to Croatia and back — instead of taking the most direct, 900-mile route.
Along the way the trucks made a brief stop in Kaliningrad, a grim and bustling Russian border checkpoint on the Baltic Sea.
Suddenly the sugar triangle made sense to them. Because Russia, and not Croatia, was listed as the intended destination, the shipments qualified for valuable special payments known as export rebates from the European Union’s farm subsidy program.
Some 200 shipments roared along this route over a three-year-period, investigators say, earning 3 million euros in refunds (about $4.5 million) for the Belgian sugar maker Beneo-Orafti. In the spring, dozens of Belgian and European investigators raided the company’s offices, freezing half of its refunds and initiating an investigation that could cost the company the remaining 1.5 million euros, and possibly more.
In the sprawling European subsidy program — which lavishes more than 50 billion euros ($75 billion at current exchange rates) a year in agricultural aid — no commodity is more susceptible to fraud, chicanery and rule-bending, experts say, than simple household sugar.
(p. B4) Across Europe there are some 2.5 million acres of beet fields that will produce 16.7 million metric tons of sugar this year for an industry worth 7 billion euros. Last year the European Union spent 475 million euros in price supports for sugar, including export subsidies. Then it spent another 1.3 billion euros on restructuring aid to reform a subsidy regime so lavish that it even prompted cold-weather Finland to start producing more sugar.
Sugar producers across the Continent cashed in — from Italy, where Italia Zuccheri collected more than 139 million euros, to France, where a handful of sugar producers received 128.5 million.
With this much money at stake, critics and some analysts say, the sugar subsidy system is like a cookie jar waiting to be pilfered.
. . .
“There’s a whole world of commercial fraud, which goes under the radar for most people,” said James Byrne, a law professor at the George Mason University School of Law in Virginia who has studied the global sugar trade. “It is a parallel universe that mimics the real world of commerce and finance.”

For the full story, see:
STEPHEN CASTLE and DOREEN CARVAJAL. “Subsidies Spur Fraud In European Sugar.” The New York Times (Tues., October 27, 2009): B1 & B4.
(Note: the online version of the article has the title “Fraud Plagues Sugar Subsidy System in Europe” and has the date October 26, 2009. The online version reverses the order of the authors’ names, and differs significantly in the first several paragraphs, mainly stylistically, but also somewhat in substance. The version quoted here is the online version.)
(Note: ellipsis added.) 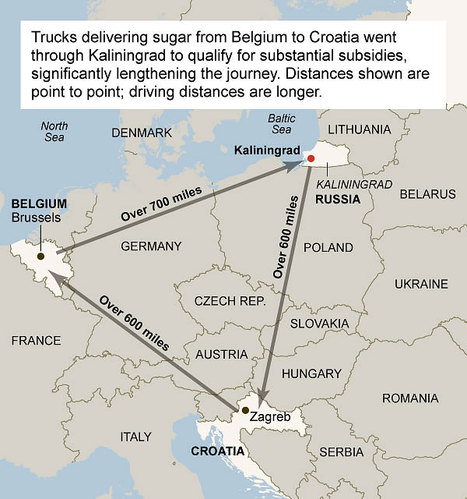 Source of both the map and the table: online version of the NYT article quoted and cited above.