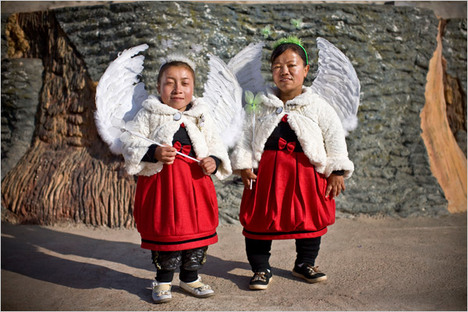 “Yang Jinlu, 18, left, and Zhang Yinghua, 37.” Source of caption and photo: online version of the NYT article quoted and cited below.

(p. A10) KUNMING, China — Chen Mingjing’s entrepreneurial instincts vaulted him from a peasant upbringing to undreamed-of wealth, acquired in ventures ranging from making electric meters to investing in real estate. But when he was 44, the allure of making money for money’s sake began to wane. He wanted to run a business that accomplished some good.

And so last September, Mr. Chen did what any socially aware entrepreneur might do: He opened a theme park of dwarfs, charging tourists about $9 a head to watch dozens of dwarfs in pink tutus perform a slapstick version of “Swan Lake” along with other skits.
Mr. Chen has big plans for his Kingdom of the Little People. Imagine a $115 million universe in miniature, set amid 13,000 acres of rolling hills and peaceful lakes in southern China’s Yunnan Province, with tiny dogs, tiny fruit trees, a 230-foot-high performance hall that looks like the stump of a prehistoric tree and standard-size guest cabins.
Also, a black BMW modified to resemble a flying saucer, from which dwarfs will spill forth to begin their performances.
“It will be like a fairy tale,” Mr. Chen said. “Everything here I have designed myself.”
. . .
Critics say displaying dwarfs is at best misguided and at worst immoral, a throwback to times when freak shows pandered to people’s morbid curiosity.
“Are they just going there to look at curious objects?” asked Yu Haibo, who leads a volunteer organization for the disabled in Jilin Province in the northeast.
“I think it is horrible,” said Gary Arnold, the spokesman for Little People of America Inc., a dwarfism support group based in California. “What is the difference between it and a zoo?” Even the term “dwarf” is offensive to some; his organization prefers “person of short stature.”
. . .
But there is another view, and Mr. Chen and some of his short-statured workers present it forcefully. One hundred permanently employed dwarfs, they contend, is better than 100 dwarfs scrounging for odd jobs. They insist that the audiences who see the dwarfs sing, dance and perform comic routines leave impressed by their skills and courage.
Many performers said they enjoyed being part of a community where everyone shares the same challenges, like the height of a sink. “Before, when we were at home, we didn’t know anyone our size. When we hang out together with normal-size people, we can not really do the same things,” said Wu Zhihong, 20. “So I really felt lonely sometimes.”
. . .
Supporters and critics agree on one point: the fact that the park is awash in job applications shows the disturbing dearth of opportunities for the disabled in China. Cao Yu, Mr. Chen’s assistant, says she receives three or four job inquiries a week.
“Under the current social situation in China, they really will not be able to find a better employment situation,” she said.
. . .
Mr. Chen said his employees had gained self-respect and self-sufficiency. “It doesn’t really matter to me what other people say,” he said. “The question is whether meeting me has changed their lives.” 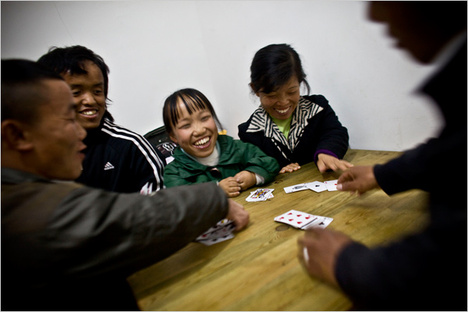 “Workers relaxed in the dormitories.” Source of caption and photo: online version of the NYT article quoted and cited above.