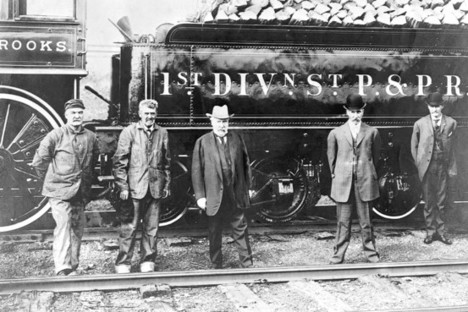 “James J. Hill (center) built a great railroad on his own dime.” Source of caption and photo: online version of the WSJ commentary quoted and cited below.

“Robber baron” became a term of derision to generations of American students after many earnest teachers made them read Matthew Josephson’s long tome of the same name about the men whose enterprise drove the American industrial age from 1861 to 1901.
Josephson’s cast of pillaging villains was comprehensive: Rockefeller, Carnegie, Vanderbilt, Morgan, Astor, Jay Gould, James J. Hill. His table of contents alone shaped impressions of those times: “Carnegie as ‘business pirate’.” “Henry Frick, baron of coke.” “Terrorism in Oil.” “The sack of California.”
I say, bring ’em back, and the sooner the better. What we need, a lot more than a $1,000 tax credit, are industries no one has thought of before. We need vision, vitality and commercial moxie. This government is draining it away.
The antidote to Josephson’s book is a small classic by Hillsdale College historian Burton W. Folsom called “The Myth of the Robber Barons: A New Look at the Rise of Big Business in America” (Young America’s Foundation). Prof. Folsom’s core insight is to divide the men of that age into market entrepreneurs and political entrepreneurs.
Market entrepreneurs like Rockefeller, Vanderbilt and Hill built businesses on product and price. Hill was the railroad magnate who finished his transcontinental line without a public land grant. Rockefeller took on and beat the world’s dominant oil power at the time, Russia. Rockefeller innovated his way to energy primacy for the U.S.
Political entrepreneurs, by contrast, made money back then by gaming the political system. Steamship builder Robert Fulton acquired a 30-year monopoly on Hudson River steamship traffic from, no surprise, the New York legislature. Cornelius Vanderbilt, with the slogan “New Jersey must be free,” broke Fulton’s government-granted monopoly.