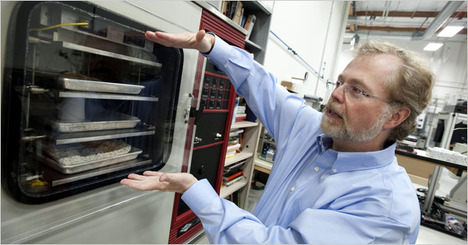 “Nathan Myhrvold, chief of Intellectual Ventures, says patent holders are being treated unfairly.” Source of caption and photo: online version of the NYT article quoted and cited below.

When Nathan Myhrvold was at Microsoft, he helped Bill Gates write The Road Ahead, a well-written book full of realistically optimistic speculation, forecast and analysis.
Besides his main initiative, discussed below, he has recently been in the news due to his bold and controversial suggestion for how to cheaply solve global warming.

(p. B1) BELLEVUE, Wash. — Nathan Myhrvold wants to shake up the marketplace for ideas. His mission and the activities of the company he heads, Intellectual Ventures, a secretive $5 billion investment firm that has scooped up 30,000 patents, inspire admiration and angst.

Admirers of Mr. Myhrvold, the scientist who led Microsoft’s technology development in the 1990s, see an innovator seeking to elevate the economic role and financial rewards for inventors whose patented ideas are often used without compensation by big technology companies. His detractors see a cynical operator deploying his bulging patent trove as a powerful bargaining chip, along with the implied threat of costly litigation, to prod high-tech companies to pay him lucrative fees. They call his company “Intellectual Vultures.”
White hat or black hat, Intellectual Ventures is growing rapidly and becoming a major force in the marketplace for intellectual capital. Its rise comes as Congress is considering legislation, championed by large technology companies, that would make it more difficult for patent holders to win large damage awards in court — changes that Mr. Myhrvold has opposed in Congressional testimony and that his company has lobbied against.
. . .
(p. B10) The issues surrounding Intellectual Ventures, viewed broadly, are the ground rules and incentives for innovation. “How this plays out will be crucial to the American economy,” said Josh Lerner, an economist and patent expert at the Harvard Business School.
Mr. Myhrvold certainly thinks so. He says he is trying to build a robust, efficient market for “invention capital,” much as private equity and venture capital developed in recent decades. “They started from nothing, were deeply misunderstood and were trashed by people threatened by new business models,” he said in his offices here.
Mr. Myhrvold presents his case at length in a 7,000-word article published on Thursday in the Harvard Business Review. “If we and firms like us succeed,” he writes, “the invention capital system will turbocharge technological progress, create many more new businesses, and change the world for the better.”
In the article and in conversation, Mr. Myhrvold describes the patent world as a vastly underdeveloped market, starved for private capital and too dependent on federal financing for universities and government agencies, which is mainly aimed at scientific discovery anyway. Eventually, he foresees patents being valued as a separate asset class, like real estate or securities.
His antagonists, he says, are the “cozy oligarchy” of big technology companies like I.B.M., Hewlett-Packard and others that typically reach cross-licensing agreements with each other, and then refuse to deal with or acknowledge the work of inventors or smaller companies.
. . .
Mr. Myhrvold personifies the term polymath. He is a prolific patent producer himself, with more than 100 held or applied for. He earned his Ph.D. in physics from Princeton and did postdoctorate research on quantum field theory under Stephen Hawking, before founding a start-up that Microsoft acquired.
He is an accomplished French chef, who has also won a national barbecue contest in Tennessee. He is an avid wildlife photographer, and he has dabbled in paleontology, working on research projects digging for dinosaur remains in the Rockies. 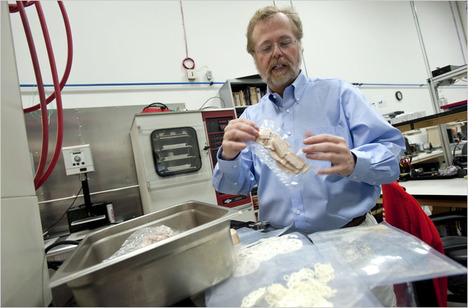 “Nathan Myhrvold with a machine that freeze-dries food. Intellectual Ventures so far has paid $315 million to individual inventors.” Source of caption and photo: online version of the NYT article quoted and cited above.