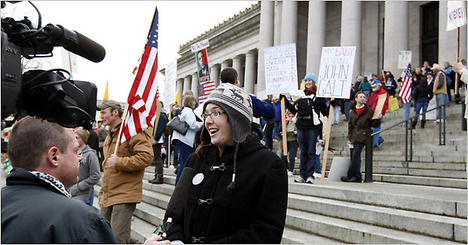 “Keli Carender resists the idea of a Tea Party leader — “there are a thousand leaders,” she says. But she has become a leader, and a celebrity. Ms. Carender at a recent rally in Olympia, Wash.” Source of caption and photo: online version of the NYT article quoted and cited below.

(p. 1) SEATTLE — Keli Carender has a pierced nose, performs improv on weekends and lives here in a neighborhood with more Mexican grocers than coffeehouses. You might mistake her for the kind of young person whose vote powered President Obama to the White House. You probably would not think of her as a Tea Party type.

But leaders of the Tea Party movement credit her with being the first.
A year ago, frustrated that every time she called her senators to urge them to vote against the $787 billion stimulus bill their mailboxes were full, and tired of wearing out the ear of her Obama-voting fiancé, Ms. Carender decided to hold a protest against what she called the “porkulus.”
. . .

(p. 19) The daughter of Democrats who became disaffected in the Clinton years, Ms. Carender, 30, began paying attention to politics during the 2008 campaign, but none of the candidates appealed to her. She had studied math at Western Washington University before earning a teaching certificate at Oxford — she teaches basic math to adult learners — and began reading more on economics, particularly the writings of Thomas Sowell, the libertarian economist, and National Review.
Reading about the stimulus, she said, “it didn’t make any sense to me to be spending all this money when we don’t have it.”
“It seems more logical to me that we create an atmosphere where private industry can start to grow again and create jobs,” she said.

For the full story, see:
KATE ZERNIKE. “Early Arrival at the Tea Party: A Young and Unlikely Activist.” The New York Times, First Section (Sun., February 26, 2010): 1 & 19.
(Note: ellipsis added.)
(Note: the online version of the article is dated February 27, 2010 and has the title “Unlikely Activist Who Got to the Tea Party Early.”)