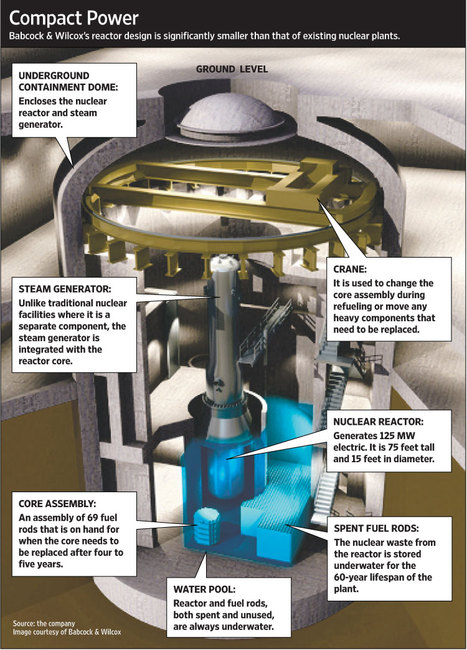 (p. A1) A new type of nuclear reactor–smaller than a rail car and one tenth the cost of a big plant–is emerging as a contender to reshape the nation’s resurgent nuclear power industry.

Three big utilities, Tennessee Valley Authority, First Energy Corp. and Oglethorpe Power Corp., on Wednesday signed an agreement with McDermott International Inc.’s Babcock & Wilcox subsidiary, committing to get the new reactor approved for commercial use in the U.S.
. . .
The smaller Babcock & Wilcox reactor can generate only 125 to 140 megawatts of power, about a tenth as much as a big one. But the utilities are betting that these smaller, simpler reactors can be manufactured quickly and installed at potentially dozens of existing nuclear sites or replace coal-fired plants that may become obsolete with looming emissions restrictions.
“We see significant benefits from the new, modular technology,” said Donald Moul, vice president of nuclear support for First Energy, an Ohio-based utility company.
He said First Energy, which operates four reactors at three sites in Ohio and Pennsylvania, has made no decision to build any new reactor and noted there’s “a lot of heavy lifting to do to get this reactor certified” by the NRC for U.S. use.
. . .
(p. A16) One of the biggest attractions, however, is that utilities could start with a few reactors and add more as needed. By contrast, with big reactors, utilities have what is called “single-shaft risk,” where billions of dollars are tied up in a single plant.
Another advantage: mPower reactors will store all of their waste on each site for the estimated 60-year life of each reactor.
. . .
. . . , some experts believe that if the industry embraces small reactors, nuclear power in the U.S. could become pervasive because more utilities would be able to afford them.
“There’s a higher likelihood that there are more sites that could support designs for small reactors than large ones,” said David Matthews, head of new reactor licensing at the Nuclear Regulatory Commission.
. . .
Experts believe small reactors should be as safe, or safer, than large ones. One reason is that they are simpler and have fewer moving parts that can fail. Small reactors also contain a smaller nuclear reaction and generate less heat. That means that it’s easier to shut them down, if there is a malfunction.
“With a large reactor, the response to a malfunction tends to be quick, whereas in smaller ones, they respond more slowly” which means they’re somewhat easier to control, said Michael Mayfield, director of the advanced reactor program at the Nuclear Regulatory Commission. Once on site, each reactor would be housed in a two-story containment structure that would be buried beneath the ground for added security. They would run round the clock, stopping to refuel every five years instead of 18 to 24 months, like existing reactors.
Jack Baker, Energy Northwest’s head of business development, says he was initially skeptical about small reactors because of the “lack of economies of scale.” But he says he now thinks small reactors “could have a cost advantage” because their simpler design means faster construction and “you don’t need as much concrete, steel, pumps and valves.”
“They have made a convert of me,” he says.
Babcock & Wilcox’s roots go back to 1867 and it has been making equipment for utilities since the advent of electrification, even furnishing boilers to Thomas Edison’s Pearl Street generating stations that brought street lighting to New York City in 1882.
Based in Lynchburg, Va., the company has been building small reactors for ships since the 1950s. In addition to reactors for U.S. Navy submarines and aircraft carriers, it built a reactor for the USS NS Savannah, a commercial vessel which is now a floating museum in Baltimore harbor. It also built eight big reactors, in the past construction cycle, including one for the ill-fated Three Mile Island plant.
When a U.S. nuclear revival looked imminent, the company debated what role it could play.
“Instead of asking, ‘How big a reactor could we make?,’ this time, we asked, ‘What’s the largest thing we could build at our existing plants and ship by rail?’ ” said Christofer Mowry, president of Modular Nuclear Energy LLC, Babcock’s recently created small-reactor division. “That’s what drove the design.”