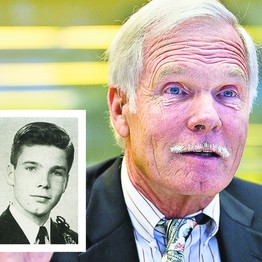 “Ted Turner, Entrepreneur. Rejected by Princeton and Harvard. ‘I want to be sure to make this point: I did everything I did without a college degree.'” Source of caption and photo: online version of the WSJ article quoted and cited below.

(p. D1) Few events arouse more teenage angst than the springtime arrival of college rejection letters. With next fall’s college freshman class expected to approach a record 2.9 million students, hundreds of thousands of applicants will soon be receiving the dreaded letters.
Teenagers who face rejection will be joining good company, including Nobel laureates, billionaire philanthropists, university presidents, constitutional scholars, best-selling authors and other leaders of business, media and the arts who once received college or graduate-school rejection letters of their own.
. . .
Mr. Buffett regards his rejection at age 19 by Harvard Business School as a pivotal episode in his life. Looking back, he says Harvard wouldn’t have (p. D2) been a good fit. But at the time, he “had this feeling of dread” after being rejected in an admissions interview in Chicago, and a fear of disappointing his father.
As it turned out, his father responded with “only this unconditional love…an unconditional belief in me,” Mr. Buffett says. Exploring other options, he realized that two investing experts he admired, Benjamin Graham and David Dodd, were teaching at Columbia’s graduate business school. He dashed off a late application, where by a stroke of luck it was fielded and accepted by Mr. Dodd. From these mentors, Mr. Buffett says he learned core principles that guided his investing. The Harvard rejection also benefited his alma mater; the family gave more than $12 million to Columbia in 2008 through the Susan Thompson Buffett Foundation, based on tax filings.
. . .
Rejected once, and then again, by business schools at Stanford and Harvard, Scott McNealy practiced the perseverance that would characterize his career. A brash economics graduate of Harvard, he was annoyed that “they wouldn’t take a chance on me right out of college,” he says. He kept trying, taking a job as a plant foreman for a manufacturer and working his way up in sales. “By my third year out of school, it was clear I was going to be a successful executive. I blew the doors off my numbers,” he says. Granted admission to Stanford’s business school, he met Sun Microsystems co-founder Vinod Khosla and went on to head Sun for 22 years.
. . .
Time puts rejection letters in perspective, says Ted Turner. He received dual rejections as a teenager, by Princeton and Harvard, he says in an interview. The future America’s Cup winner attended Brown University, where he became captain of the sailing team. He left college after his father cut off financial support, and joined his father’s billboard company, which he built into the media empire that spawned CNN. Brown has since awarded him a bachelor’s degree.
Tragedies later had a greater impact on his life, he says, including the loss of his father to suicide and his teenage sister to illness. “A rejection letter doesn’t even come close to losing loved ones in your family. That is the hard stuff to survive,” Mr. Turner says. “I want to be sure to make this point: I did everything I did without a college degree,” he says. While it is better to have one, “you can be successful without it.” 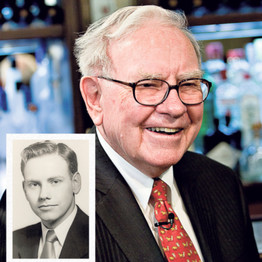 “Warren Buffett, Chairman of Berkshire Hathaway Inc. After Harvard Business School said no, everything ‘I thought was a crushing event at the time, has turned out for the better.'” Source of caption and photo: online version of the WSJ article quoted and cited above.