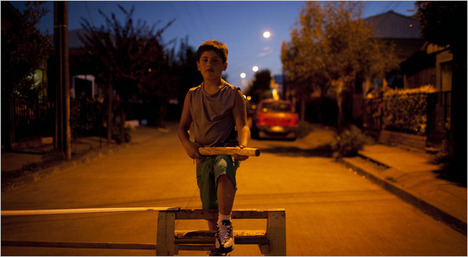 “Jaime Silva, 10, wielded a stick with a nail on the end in Los Ángeles, Chile, “just in case they try to rob us,” he said.” Source of caption and photo: online version of the NYT article quoted and cited below.

(p. A16) LOS ÁNGELES, Chile — At night, residents huddle around bonfires and guard their streets with torches and sticks, ready to repel outsiders who might try to break into their darkened homes.

Elsewhere, the military and the federal police enforce nighttime curfews, guard the entrances to supermarkets and monitor gasoline rationing to make sure no one gets more than his share.
As darkness settled in and the curfew took effect on Wednesday, residents on the outskirts of Los Ángeles began placing wooden barriers in front of their streets and picking up weapons to protect against armed bandits they said were taking advantage of the chaos to steal from their homes.
“We’re taking care of the streets, just in case they try to rob us,” said Jaime Silva, 10, as he wielded a thick stick with a nail on the end.
Nearby, his mother looked on, her arms crossed, watching her son and other boys as they stood guard behind the barrier.
“We’re trying to take care of the little we have here,” said the mother, Ana Beroiz, 34, noting that there had been robberies in other parts of town. “We’re here all night, first the mothers and then the fathers.”