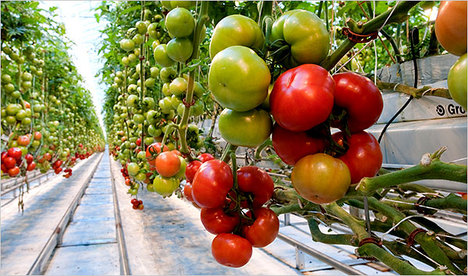 “Some of the more than 500,000 plants at Backyard Farms at its Maine greenhouse.” Source of caption and photo: online version of the NYT article quoted and cited below.

(p. D1) AN icy mixture of rain and sleet fell on the glass roof of Greenhouse Two at Backyard Farms here, but as its big blue door slid open and the warm, green, celery smell of tomato plants wafted out, it was summer.

When it was built three years ago, the company’s first 24-acre greenhouse in Madison was already the largest building in Maine. This second connected greenhouse, completed last year, brought the total area under glass to some 42 acres, or roughly the size of 32 football fields. Even in the depths of winter, a million tomatoes ripen indoors to harvest each week, snipped from their vines by workers in T-shirts and shorts.
. . .
Once, if you wanted tomatoes out of season, you mainly had to settle for hard pink ones picked green in the fields of Florida or Mexico and shipped by truck. Commercial greenhouses could do better, but they were a niche market.
Backed by consumer demand for fresh tomatoes year round, the indoor acreage devoted to growing tomatoes has become nearly six times as large since the early 1990s, said Roberta Cook, a marketing economist who helped write what many in the industry consider to be the definitive report on greenhouse tomatoes in 2005.
Those tough pink ones are still good and cheap enough for most fast food restaurants and the food service industry, which buy about half the fresh tomatoes sold in the United States. But with shoppers willing to pay a pre-(p. D5)mium — even $4 to $5 a pound — for red vine-ripened ones with more flavor, greenhouse tomatoes now represent more than half of every dollar spent on fresh tomatoes in American supermarkets, according to figures from the Perishables Group, a market research firm in Chicago.
. . .
Advances in genetics have allowed breeders to cross-pollinate precisely for control over specific attributes like size, color, disease resistance, firmness for shipping and levels of acids and sugars, the balance of which accounts for the bulk of a tomato’s flavor. Too little sugar turns fruit tart. Too little acid turns it bland. Too little of both leaves tomatoes with little flavor.
As tomatoes ripen on the vine they develop more of those sugars and acids and other flavor elements. But most of the major farms growing tomatoes that are sold fresh year round are in areas where the climate is more hospitable to varieties best picked green.
By creating their own climate — whether in Arizona, Maine or Canada — greenhouses allow growers to pick and ship tomatoes only when they’re ripe. 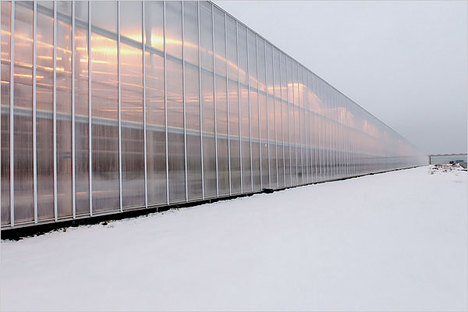 “Even as snow falls outside, workers harvest tomatoes year-round at Backyard Farms in Madison, Maine. About 200 of them tend a half-million plants under 42 acres of glass, roughly the same amount of floorspace as in the Chrysler Building.” Source of caption and photo: online version of the NYT article quoted and cited above.