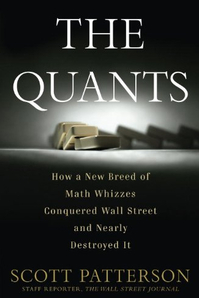 (p. 7) The virtually exclusive use of mathematical models, Mr. Patterson says, was what separated the younger cohorts of quants from their Wall Street forebears. Unlike Warren Buffett or Peter Lynch, the quants did not focus on so-called market fundamentals like what goods or services a particular company actually produced. Seldom if ever did they act on old-fashioned gut instinct. Instead, they focused on factors like how cheap a stock was relative to the rest of the market or how quickly its price had risen or fallen.

Therein was the quants’ flaw, according to Mr. Patterson. Pioneers like Mr. Thorp understood that while the math world and the financial world have much in common, they aren’t always in sync. The quant traders’ model emphasized the most likely moves a stock or bond price could make. It largely ignored the possibility of big jolts caused by human factors, especially investor panics.
“The model soon became so ubiquitous that, hall-of-mirrors-like, it became difficult to tell the difference between the model and the market itself,” Mr. Patterson declares.
Move ahead to August 2007 and beyond, when markets swooned on doubts about subprime mortgages. Stocks that the model predicted were bound to go up went sharply down, and vice versa. Events that were supposed to happen only once in 10,000 years happened three days in a row.

The reference to Patterson’s book, is:
Patterson, Scott. The Quants: How a New Breed of Math Whizzes Conquered Wall Street and Nearly Destroyed It. New York: Crown Business, 2010.