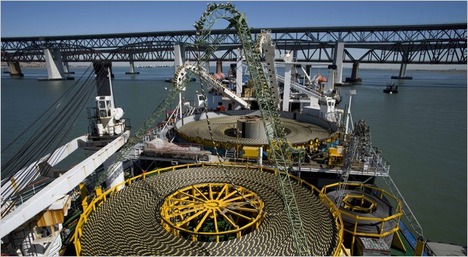 “Laying line in San Francisco for the Trans Bay Cable project, which submerged 33 miles of cable.” Source of caption and photo: online version of the NYT article quoted and cited below.

(p. B1) Generating 20 percent of America’s electricity with wind, as recent studies proposed, would require building up to 22,000 miles of new high-voltage transmission lines. But the huge towers and unsightly tree-cutting that these projects require have provoked intense public opposition.

Recently, though, some companies are finding a remarkably simple answer to that political problem. They are putting power lines under water, in a string of projects that has so far provoked only token opposition from environmentalists and virtually no reaction from the larger public.
. . .
(p. B7) . . . , the underwater approach solves some intractable problems. In San Francisco, for example, old power plants that burn natural gas are about to be retired because a new transmission company has succeeded in running a line 33 miles across the San Francisco Bay.
Mr. Stern said his company’s Neptune Cable, which runs from Sayreville, N.J., to Levittown, N.Y., on Long Island, now carries 22 percent of Long Island’s electricity. His company is trying to complete a deal for a cable that would run from Ridgefield, N.J., to a Consolidated Edison substation on West 49th Street in Manhattan.
Those two cables were not motivated primarily by environmental goals — they are meant to connect cheap generation to areas where power prices are high. Mr. Stern’s company, PowerBridge, is now considering two renewable energy projects, however. One cable would connect proposed wind farms on the Hawaiian islands of Molokai and Lanai to the urban center on Oahu, and another would bring wind power from Maine along the Atlantic coast to Boston.