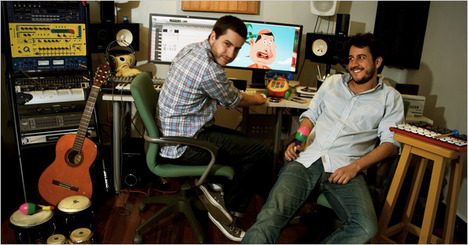 “Juan Andrés Ravell and Oswaldo Graziani two of the creators of the Web site El Chigüire Bipolar, or Bipolar Capybara, at their office in Caracas, Venezuela. They drew inspiration from American shows like “The Colbert Report” and Web sites like The Onion.” Source of caption and photo: online version of the NYT article quoted and cited below.

(p. 8) CARACAS, Venezuela — This may be a perilous time to operate a Web site focused on politics here, given President Hugo Chávez’s recent push for new controls of Internet content. But one plucky Venezuelan satirical site is emerging as a runaway success in Latin America as it repeatedly skewers Mr. Chávez and a host of other leaders.

Named in honor of the capybara, the Labrador retriever-sized rodent that Venezuelans are fond of hunting and eating, the 2-year-old Web site, El Chigüire Bipolar, or Bipolar Capybara, is rivaling or surpassing in page views leading Venezuelan newspapers like the Caracas daily El Nacional.
The rise of Chigüire Bipolar, which has already drawn the wrath of state-controlled media here, and a handful of other popular Venezuelan sites focused on politics is taking place within a journalistic atmosphere here that international press groups say is marked increasingly by fear, intimidation and self-censorship.
. . .
Mr. Ravell and Mr. Graziani, who earn a living as freelance television producers and scriptwriters, finance Chigüire Bipolar out of their own pockets and with a meager revenue stream from advertising and sale of T-shirts printed with their logo.
They produce the site with a third Venezuelan partner based in Miami, Elio Casale, in a chaotic flurry of e-mail, instant-messaging and BlackBerry text messages.
“We don’t actually talk to each other that much,” Mr. Ravell said.
In an interview, Mr. Ravell said he remained hopeful that Chigüire Bipolar was opening the way for more multifaceted debate in Venezuela instead of representing a final burst of expressive ebullience online in a scenario in which Mr. Chávez might succeed in exerting control over a medium that until now has largely escaped his sway.
“Satire,” he said, “always evolves to resist the attempts to extinguish it.”