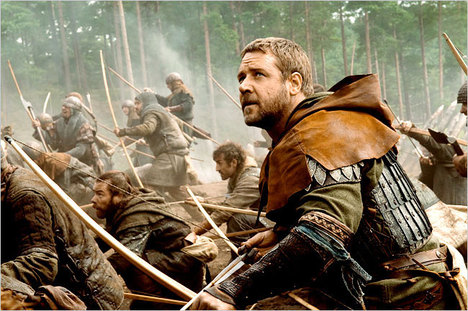 “Mr. Crowe as Robin Hood.” Source of caption and photo: online version of the NYT review quoted and cited below.

Ridley Scott has directed some entertaining movies (Blade Runner and Alien to name two) and he also directed one of the most famous tech ads of all time: upstart Apple smashing the uptight corporate conformity of IBM.
And now he brings us what we could use about now: a libertarian Robin Hood who defends property rights and fights high taxes.
When all is said and done, liberal NYT reviewer A.O. Scott doesn’t much like the movie in the full review that is briefly quoted below. (But I want to see the movie anyway.)

(p. C1) You may have heard that Robin Hood stole from the rich and gave to the poor, but that was just liberal media propaganda. This Robin is no socialist bandit practicing freelance wealth redistribution, but rather a manly libertarian rebel striking out against high taxes and a big government scheme to trample the ancient liberties of property owners and provincial nobles. Don’t tread on him!