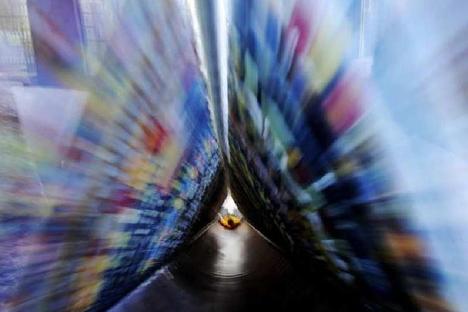 “A boy slides down the enclosed “Monster Slide,” which drops riders the length of three flights of stairs.” Source of caption and photo: online version of the WSJ article quoted and cited below.

We took Jenny to several children’s museums when she was young, but none was as neat as the City Museum.
It appears that it has continued to get better in the years since.
My view is that a child’s parents should generally decide what risks their child should be allowed to take. Parents have a right to be parents, and they generally do a better job of it than the government does.

(p. A1) The City Museum, housed in 10-story brick building, shows none of the restraint or quiet typical of museums. A cross between a playground and a theme park, it recycles St. Louis’ industrial past into such attractions as slides made from assembly-line rollers. Just about everything can be touched or climbed, including dozens of Mr. Cassilly’s sculptures, among them a walk-through whale on (p. A10) the first floor.

Despite the whiff of danger, or perhaps because of it, the City Museum is one of St. Louis’s most popular attractions. Its 700,000 annual attendance is roughly twice the population of St. Louis and dwarfs the turnout at refined destinations such as the St. Louis Art Museum.
The injuries and lawsuits put the City Museum at the center of an enduring argument over the line between liability and personal responsibility. Some of the injured and their lawyers say the museum is deceptively dangerous and doesn’t do enough to publicize its risks through signs or other warnings.
Mr. Cassilly counters that it is as safe as it can be without being a bore. “They [lawyers] are taking the fun out of life.”
. . .
Mr. Cassilly trained as a sculptor but made most of his money as a developer, having bought, renovated and sold some four dozen homes and commercial properties over the years. In 1993 he paid $525,000 for two downtown St. Louis buildings once used by a shoe company, and opened the City Museum in 1997. It’s now a for-profit enterprise that he co-owns with a local investor.
He says the museum is about first-hand experience, a “computer-free zone” where rules are kept to a minimum. At the “skateless park,” kids run up and slide down wooden skateboard ramps now used as slides. One smaller ramp has a rope swing that kids use to swing across the ramp, not always successfully.
“I slipped and the edge scraped my leg,” said Garett Vance, 11, sitting atop what the museum bills as the world’s largest pencil with a museum-provided ice pack taped to his leg. His mother, Mindy Vance, says a friend warned her that the museum was dangerous but she wasn’t deterred.
“You take a risk when you go anyplace,” says Ms. Vance, a nurse-practitioner who lives in Springfield, Ill., about two hours away. 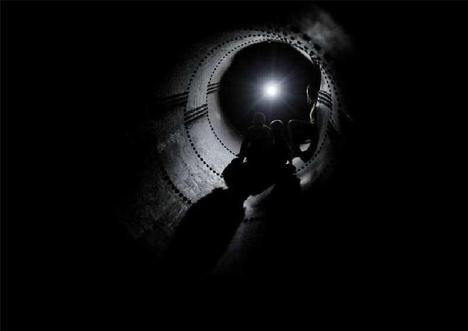 “Visitors passed through a dark tunnel. The injured and their lawyers say the museum is deceptively dangerous and doesn’t do enough to publicize its risks. Mr. Cassilly, the founder, counters that it is as safe as it can be without being a bore.” Source of caption and photo: online version of the WSJ article quoted and cited above.