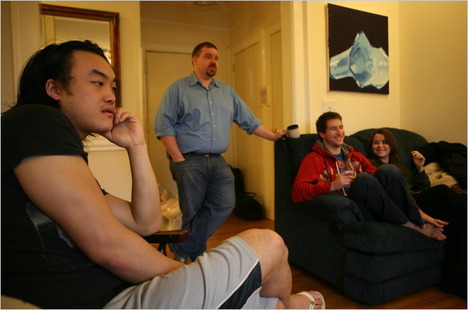 “From left, Doua Moua, 23, George Summer, 30, and David Everett and Jasmine Ward, both 21, are among six people in a four-bedroom apartment in Hamilton Heights. “It’s part of New York City culture,” Mr. Moua said.” Source of caption and photo: online version of the NYT article quoted and cited below.

(p. A16) Doua Moua, 23, played a menacing gangster in a Clint Eastwood movie, but Mr. Moua swears he really is a nice, gentle and rules-abiding fellow. At least he was until he moved to New York City and unwittingly slipped into a world of lawlessness.

Mr. Moua lives with five roommates. And in New York, home to some of the nation’s highest rents and more than eight million people, many of them single, it is illegal for more than three unrelated people to live in an apartment or a house.
. . .
Mr. Moua’s landlord, who did not want his name published for fear of a crackdown, said he wrestled with converting some of his apartments into four-bedroom units. He knew it was illegal to allow four unrelated people to live together, but decided that if tenants were willing to live in what was once a dining room, it was fine with him. He could collect slightly more in rent over all and charge less for each room.
“If it’s done in a good way, and there’s not unlimited cramming in, and the shared facilities are adequate,” the landlord said, “then it actually helps solve the affordable housing problem, which I think is a good thing.” 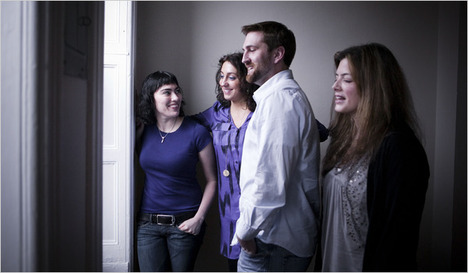 “From left, Anya Kogan, 27, Jordan Dann, 33, Nick Turner, 29, and Michelle McGowan, 32, share a town house in Brooklyn.” Source of caption and photo: online version of the NYT article quoted and cited above.