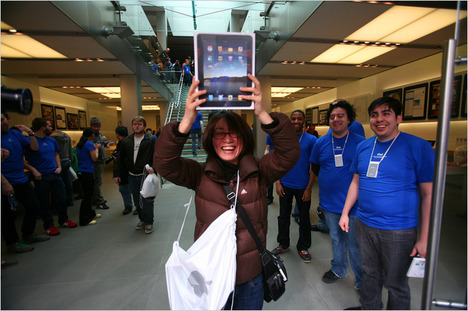 “Buying on Day 1: Sayuri Watanabe came from Japan to be among the first to get an iPad last month at the Apple store in downtown San Francisco.” Source of caption and photo: online version of the NYT article quoted and cited below.

(p. 6) WHY would anyone rush to buy a product knowing full well that it would be cheaper — and probably better — in a matter of months?

Hundreds of thousands of iPad buyers did just that last month. Steven P. Jobs, Apple’s chief executive, crowed that in the first 28 days on the market, Apple sold one million iPads. He found it remarkable that buyers snatched up this new slate computer at twice the fervid pace of the first iPhone.
But what is truly remarkable about this surge in consumption is that early adopters — those who simply have to own a new gadget right away — cheerfully exhibited what might seem to be irrational behavior. These ardent consumers will stand in long lines, if that’s what it takes, to get an overpriced gadget ahead of everyone else they know.
A tough lesson about buying early could have been learned by the iPhone’s first buyers back in 2007. Those early adopters paid $600 for a phone. Two months later, Apple dropped the price to $400. Then, in June 2009, it introduced a better version, with twice the storage, for $200, one-third the original’s price.
. . .
Dan Ariely, a professor of behavioral economics at Duke University and the author of a new book, “The Upside of Irrationality,” has studied why earlier adopters do what they do. “It’s not about the cost-benefit analysis,” he says. And rarely is it a successful calculation of higher productivity, though many a person has tried to justify purchases of expensive toys that way.
It can be more about cementing one’s identity. Although people who want to be first with a product aren’t making a direct calculation — “I’d pay $100 for my ego” — they may derive value from showing off a new product or being perceived as being at technology’s forefront.
“I realized years ago that I derive great pleasure from buying a new gadget,” said Professor Ariely. “I bought a Segway.”
And public awareness may matter. Professor Ariely says the behavior is akin to how we can be more willing to do something good if the public knows about it.
. . .
But even if you would never be the first in your neighborhood to buy a gadget, don’t scorn the early adopters. They are working for you. “They, in a sense, provide valuable services to other consumers by their willingness to serve as a guinea pig,” said Jay Pil Choi, a professor of economics at Michigan State University, who wrote a much-quoted paper on herd behavior and the “penguin effect.”
. . .
HE described early adopters as pioneers. “If all consumers are striving for value and take the approach of ‘wait and see,'” he said, “the new products will never be able to take off or take much longer to succeed in the marketplace.”
He added, “Their early purchase allows the firms to go down the learning curve and enables a lower price for other consumers.”