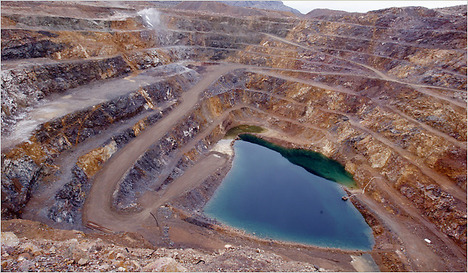 “The Molycorp Minerals rare earth mine in Mountain Pass, Calif.” Source of caption and photo: online version of the NYT article quoted and cited below.

If the government does not interfere with the price system, then the prospect of higher prices will provide private companies and entrepreneurs the incentive to take risks to provide us with what we need. In the article quoted below, the example is rare earth minerals that are used in high technology products.

(p. B1) On a high plateau where burros and jackrabbits wander an hour’s drive southwest of Las Vegas, a 400-foot-deep chasm hewn from volcanic rock sits at the center of an international policy debate.

The chasm, in Mountain Pass, Calif., used to be the world’s main mine for rare earth elements — minerals crucial to military hardware and the latest wind turbines and hybrid gasoline-electric cars. Molycorp Minerals, which owns the mine, announced on Monday that it had registered with the Securities and Exchange Commission for an initial public offering to help raise the nearly $500 million needed to reopen and expand the mine.
Molycorp is making a big bet that its mine — once the world leader in production of rare earth elements, but now a rusting relic — can be made competitive again. Global demand is surging for the minerals. And customers, particularly the American military, are seeking alternatives to China, which now mines 97 percent of the world’s rare earth elements.
As part of reopening the mine, Molycorp plans to increase its capacity to mine and refine neodymium for rare earth magnets, which are extremely lightweight and are used in many high-tech applications. It will also resume bulk production of lower-value rare earth elements like cerium, used in industrial processes like polishing glass and water filtration.