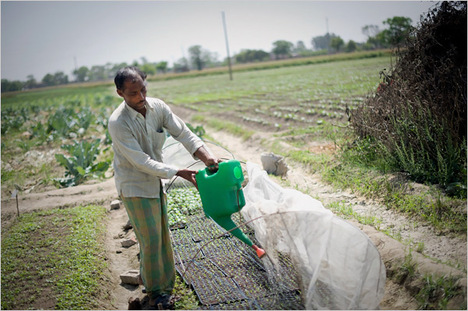 “Mohammad Haneef, [above], a farmer in Haider Nagar, said that Wal-Mart is better than his previous clients. “You have to establish trust,” he said in Hindi. “Wal-Mart has been paying on time. We would just like them to buy more.”” Source of caption and photo: online version of the NYT article quoted and cited below. (Note: bracketed word added.)

(p. B1) HAIDER NAGAR, India — At first glance, the vegetable patches in this north Indian village look no different from the many small, spare farms that dot the country.

But up close, visitors can see some curious experiments: insect traps made with reusable plastic bags; bamboo poles helping bitter gourd grow bigger and straighter; and seedlings germinating from plastic trays under a fine net.
These are low-tech innovations, to be sure. But they are crucial to the goals of the benefactor — Wal-Mart — that supplied them.
Two years after Wal-Mart came to India, it is trying to do to agriculture here what it has done to industries around the world: change business models by using its hyper-efficient practices to improve productivity and speed the flow of goods.
. . .
(p. B3) Here in Haider Nagar, in the bread basket state of Punjab, farmers who supply vegetables to Wal-Mart say they like working with the company. It typically pays them 5 to 7 percent more than they earn from local wholesale markets, they said. And they do not have to pay to transport produce because Wal-Mart picks it up from their fields.
Abdul Majid, who sells cucumbers to Wal-Mart, says his yields have risen about 25 percent since he started following farming advice about when to apply fertilizers and which kinds — more zinc, less potash — from the company and its partner, Bayer CropScience.
Mohammad Haneef, a farmer in a nearby village, said he had sold to two other companies before Wal-Mart, but one shut down and the other cheated him and paid him late. Wal-Mart is much better, he said, but its buyers are picky, taking the best vegetables and leaving him with inferior ones that he still must truck to wholesale markets.
“You have to establish trust,” he said in Hindi. “Wal-Mart has been paying on time. We would just like them to buy more.”