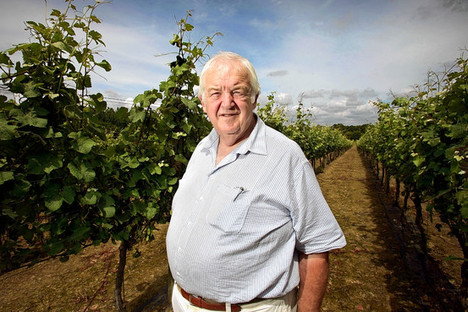 “Mike Roberts, at Ridgeview in 2007, says making wine is easier now.” Source of caption and photo: online version of the WSJ article quoted and cited below.

The Brits are starting to claw back some ground. In January, a little-known bubbly from the U.K’s Nyetimber Estate was crowned “world’s best sparkling wine” at a prestigious taste-off in Italy, defeating a dozen Champagnes, including Roederer, Bollinger and Pommery. Last year, when Britain hosted the G-20 meeting, another effervescent Nyetimber was served to President Barack Obama, Germany’s Angela Merkel and President Nicolas Sarkozy of France.
English bubbly is on the rise partly due to better winemaking techniques. But some vintners say they’re being helped by another, unexpected factor: a warming climate.
Official data indicate that the past 10 years were the warmest on record globally. In England, this led to plumper and riper grapes most seasons, especially for sparkling wines. The number of vineyards in the U.K. jumped to 416 in 2008 from 363 in 2000, according the trade group English Wine Producers
“Just 20 years ago, it was really difficult to make good wine in cooler climate areas,” says Gregory Jones, who studies the effect of climate change on the (p. A18) global wine industry at Southern Oregon University. “Now it’s not such a challenge.”
With the help of warmer summers, “some of the risk of making sparkling wine here is gone,” says Mike Roberts, founder and chief winemaker of the Ridgeview estate here, 45 miles south of London. “We have everything going for us to out-Champagne Champagne.”
Last year, the fifth-hottest on record, Ridgeview’s grapes ripened two weeks earlier than usual, allowing for the harvest to be brought in before the onset of wet October weather. Mr. Roberts and other English winemakers say 2009 was one of the best growing seasons they’ve seen.

For the full story, see:
GAUTAM NAIK. “‘Warmer Climate Gives Cheer to Makers of British Bubbly; Thanks to Milder Summers, England Takes Some Air Out of France’s Famous Tipple.” The Wall Street Journal (Tues., May 11, 2010): A1 & A18. 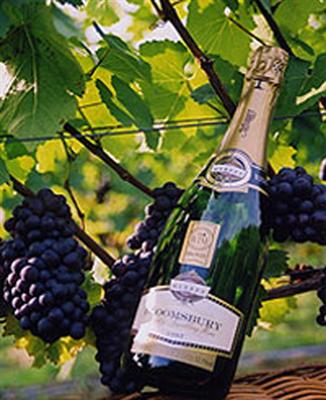 Source of photo: http://www.goodfoodpages.co.uk/images/listings/1580/large/ridgeview.jpg Source of quote: Mike Roberts above.