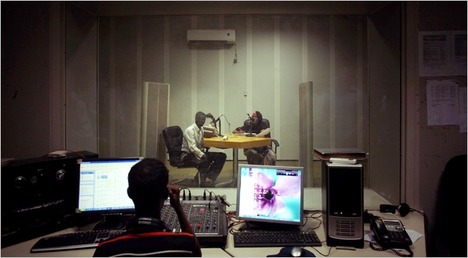 “Anchors read the latest news from around the world this month in the studio at Radio Mogadishu, which opened in 1951.” Source of caption and photo: online version of the NYT article quoted and cited below.

(p. A6) This is a typical day at Radio Mogadishu, the one and only relatively free radio station in south central Somalia where journalists can broadcast what they like — without worrying about being beheaded. The station’s 90-foot antennas, which rise above the rubble of the neighborhood, have literally become a beacon of freedom for reporters, editors, technicians and disc jockeys all across Somalia who have been chased away from their jobs by radical Islamist insurgents.

. . .
Somalia has become one of the most dangerous places in the world to practice journalism, with more than 20 journalists assassinated in the past four years. “We miss them,” Mr. Africa said about his fallen colleagues.
He cracked an embarrassed smile when asked about his name. “It’s because I’m dark, really dark,” he said.
Mr. Africa used to work at one of the city’s other radio stations (the city has more than 10) but decided to move on after fighters with the Shabab dropped by and threatened to kill the reporters if they did not broadcast pro-Shabab news. Mr. Africa called the Shabab meddlers “secret editors” and now he carries a gun.
“I tried to get the other journalists to buy pistols,” Mr. Africa remembered. “But nobody listened to me.”
Another reporter, Musa Osman, said that his real home was only about a mile away.
“But I haven’t seen my kids for months,” he said.
He drew his finger across his throat and laughed a sharp, bitter laugh when asked what would happen if he went home.
The digs here are hardly plush. Most of the journalists sleep on thin foam mattresses in bald concrete rooms. The station itself is a crumbling, bullet-scarred reflection of this entire nation, which has been essentially governmentless for nearly two decades.
. . .
They air the speeches of insurgent leaders, they say, and stories about government soldiers robbing citizens.
“If the government does something bad,” Mr. Africa said. “We report it.”