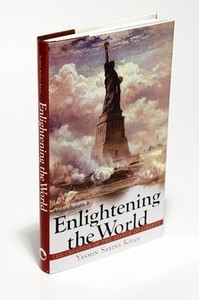 I believe that a case can be made that Grover Cleveland is an under-appreciated President. (I like his comment on the Statue of Liberty quoted below.)

(p. W9) The cold rains of Oct. 28, 1886, did little to dampen the ardor of the tens of thousands of giddy New Yorkers who crowded onto the southern tip of Manhattan that afternoon to watch the festivities on Bedloe’s Island, a patch of land in New York Harbor. On cue, an enormous veil dropped, and the spectators gazed for the first time at the face of the massive statue that, until then, had been the subject not only of curiosity but also of skepticism.

Whatever doubts Americans might have had about this unsolicited, and rather costly, gift from the French seemed at once to vanish. A “thunderous cacophony of salutes from steamer whistles, brass bands, and booming guns, together with clouds of smoke from the cannonade, engulfed the statue for the next half hour,” Yasmin Sabina Khan writes in “Enlightening the World,” her account of how the Statue of Liberty came to be.
The crowd roared, then various speakers held forth, welcoming the 225-ton, 151-foot-tall Lady Liberty, as she would soon be known. President Grover Cleveland, in his remarks, tried to distinguish this colossus from others of its kind throughout human history. Where the statue-symbols of other nations might depict “a fierce and warlike god, filled with wrath and vengeance,” this one exhibited only “our own peaceful deity keeping watch before the open gates of America.”
President Cleveland’s interpretation of the statue turned out to be but one of many over the years. To Ms. Khan the Statue of Liberty’s symbolic significance is not a complicated matter and never was. The statue celebrates the “friendship” of the people of France and those of the U.S.; it represents “liberty” and “liberty” alone.