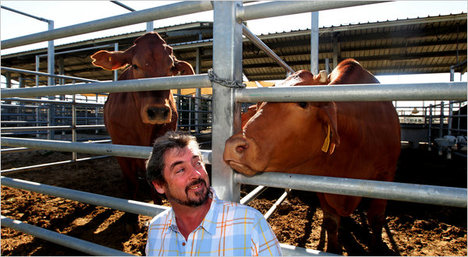 “Athol Klieve, an expert on cattle stomachs, with steers used for research on reducing methane emissions from belching cattle.” Source of caption and photo: online version of the NYT article quoted and cited below.

(p. A14) GATTON, Australia — To hear Athol Klieve tell it, a key to reducing Australia’s enormous carbon emissions is to make a cow more like this country’s iconic animal — the kangaroo.
. . .
Australia contributes more greenhouse gases per capita than just about any other country, with its coal-fired power plants leading the way. But more than 10 percent of those gases come from what bureaucrats call livestock emissions — animals’ burping.
At any given point, after munching and regurgitating grass, tens of millions of Australian cattle, as well as sheep, are belching methane gases nonstop into the air. With methane considered 21 times more potent than carbon dioxide in warming the atmosphere, the burping has given ammunition to environmentalists, vegetarians and other critics of beef while initially putting the large meat industry on the defensive.
. . .
Ruminants release methane because of the peculiar way they digest their food. Inside a cow’s foregut, which can contain more than 200 pounds of grass at any given time, fermentation of the food leads to the release of hydrogen, a byproduct that would slow down the fermentation. Microbes known as methanogens help the ruminants get rid of the excess hydrogen by producing methane gases that the animals release into the atmosphere.
In other animals known as hindgut fermenters, including humans — in which food is fermented after going through their stomachs — methane is sometimes released through flatulence, a fact that, Mr. Klieve said, has led to misunderstanding about his work
“We’ve had to put up with that all the time,” Mr. Klieve said. “It comes from the front end! In the cow, it comes from the front end. But if you’re a hindgut fermenter, it goes the other way.”
. . .
Like cattle, kangaroos are also foregut fermenters. But instead of relying on methanogens to get rid of the unwanted hydrogen, kangaroos use different microbes that reduce hydrogen by producing not methane, but harmless acetic acids, the basis of vinegar.
. . .
“It’s going to be very difficult to meet the current production needs, particularly for the current global population, with kangaroo,” Ms. Henry said. “You need something like 10 kangaroos to produce the same amount of meat as one steer. You can’t herd them or fence them in.”
Undaunted, a few kangaroo meat entrepreneurs are pressing ahead, seeing methane emissions as a business opportunity. 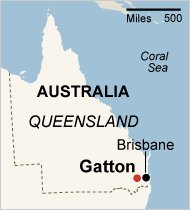 Source of map: online version of the NYT article quoted and cited above.