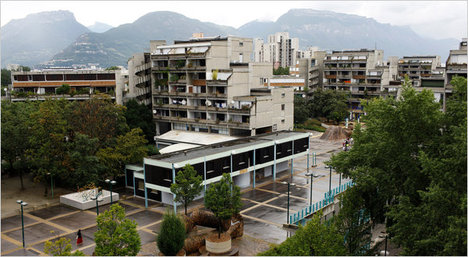 “The planned neighborhood Villeneuve, in Grenoble, has slowly degraded into a poor district before it finally burst into flames three weeks ago, with a mob setting nearly 100 cars on fire.” Source of caption and photo: online version of the NYT article quoted and cited below.

(p. A7) GRENOBLE, France — A utopian dream of a new urban community, built here in the 1970s, had slowly degraded into a poor neighborhood plagued by aimless youths before it finally burst into flames three weeks ago.

After Karim Boudouda, a 27-year-old of North African descent, and some of his friends had robbed a casino, he was killed in an exchange of automatic gunfire with the police. The next night, Villeneuve, a carefully planned neighborhood of Grenoble in eastern France, exploded. A mob set nearly 100 cars on fire, wrecked a tram car and burned an annex of city hall.
. . .
Villeneuve, or “new city,” emerged directly out of the social unrest of the May 1968 student uprising.
People committed to social change, from here as well as from Paris and other cities, came to create a largely self-contained neighborhood of apartment buildings, parks, schools, and health and local services in this city of 160,000 people, at the spectacular juncture of two rivers and three mountain ranges at the foot of the French Alps.