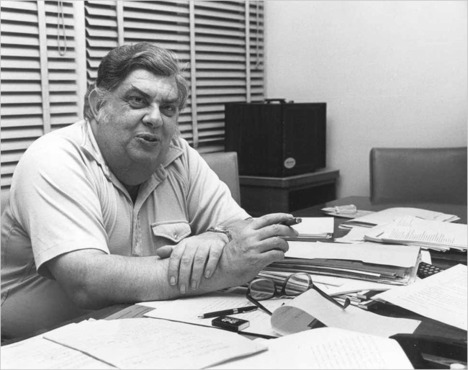 “Geoffrey Burbidge’s work in astronomy changed the field.” Source of caption and photo: online version of the NYT obituary quoted and cited below.

(p. 26) Geoffrey Burbidge, an English physicist who became a towering figure in astronomy by helping to explain how people and everything else are made of stardust, died on Jan. 26 in San Diego. He was 84.
. . .
Dr. Burbidge’s skepticism extended to cosmology. In 1990, he and four other astronomers, including Drs. Arp and Hoyle, published a broadside in the journal Nature listing arguments against the Big Bang.
Dr. Burbidge preferred instead a version of Dr. Hoyle’s Steady State theory of an eternal universe. In the new version, small, local big bangs originating in the nuclei of galaxies every 20 billion years or so kept the universe boiling. To his annoyance, most other astronomers ignored this view.
In a memoir in 2007, Dr. Burbidge wrote that this quasi-steady state theory was probably closer to the truth than the Big Bang. But he added that “there is such a heavy bias against any minority point of view in cosmology that it may take a very long time for this to occur.”
Despite his contrarian ways, Dr. Burbidge maintained his credibility in the astronomical establishment, serving as director of Kitt Peak from 1978 to 1984 and editing the prestigious Annual Review of Astronomy and Astrophysics for more than 30 years. He was “a very clear-thinking heretic,” Dr. Strittmatter said.