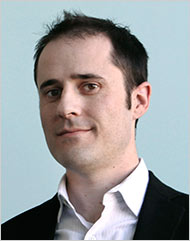 (p. 9) I GREW up on a farm in Nebraska, where we grew mostly corn and soybeans. During the summers I was responsible for making sure the crops were irrigated.

After high school, I enrolled at the University of Nebraska at Lincoln, but I stayed only a year and a half. I felt college was a waste of time; I wanted to start working. I moved to Florida, where I did some freelance copywriting. After that I moved to Texas and stayed with my older sister while I figured out what to do next. In 1994, I returned to Nebraska and started my first company with my dad.
We didn’t know anything about the Internet, but I thought it was going to be a big deal. We produced CD-ROMs and a video on how to use the Internet, and we did some Web hosting. I recruited some friends and we tossed around some ideas, but none of us knew how to write software and we didn’t have much money. We watched what entrepreneurs in California were doing and tried to play along.
. . .
My life has been a series of well-orchestrated accidents; I’ve always suffered from hallucinogenic optimism. I was broke for more than 10 years. I remember staying up all night one night at my first company and looking in couch cushions the next morning for some change to buy coffee. I’ve been able to pay my father back, which is nice, and my mother doesn’t worry about me as much since I got married a year and a half ago.