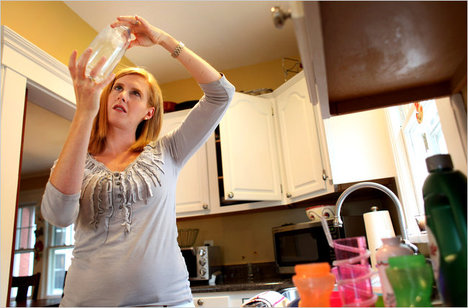 “Elise Jones has noticed “a white dusty film” on her dishes and attributes it to reduced phosphates in dishwasher detergent.” Source of caption and photo: online version of the NYT article quoted and cited below.

(p. 1) Some longtime users were furious.

“My dishes were dirtier than before they were washed,” one wrote last week in the review section of the Web site for the Cascade line of dishwasher detergents. “It was horrible, and I won’t buy it again.”
“This is the worst product ever made for use as a dishwashing detergent!” another consumer wrote.
Like every other major detergent for automatic dishwashers, Procter & Gamble’s Cascade line recently underwent a makeover. Responding to laws that went into effect in 17 states in July, the nation’s detergent makers reformulated their products to reduce what had been the crucial ingredient, phosphates, to just a trace.
. . .
(p. 4) Phosphorus in the form of phosphates suspends particles so they do not stick to dishes and softens water to allow suds to form.
Now that the content in dishwasher detergent has plummeted to 0.5 percent from as high as 8.7 percent, many consumers are just noticing the change in the wash cycle as they run out of the old product.
“Low-phosphate dish detergents are a waste of my money,” said Thena Reynolds, a 55-year-old homemaker from Van Zandt County, Tex., who said she ran her dishwasher twice a day for a family of five. Now she has to do a quick wash of the dishes before she puts them in the dishwasher to make sure they come out clean, she said. “If I’m using more water and detergent, is that saving anything?” Ms. Reynolds said. “There has to be a happy medium somewhere.”
. . .
. . . Jessica Fischburg, a commerce manager in Norwich, Conn., for CleaningProductsWorld.com, which sells janitorial supplies in bulk, said she was not surprised that many of her clients rejected products marketed as environmentally friendly.
“The reality of any green product is that they generally don’t work as well,” she said. “Our customers really don’t like them.”
. . .
. . . in its September issue, Consumer Reports reported that of 24 low- or phosphate-free dishwasher detergents it tested, including those from environmentally friendly product lines that have been on the market for years, none matched the performance of products with phosphates.

One thought on “The Dirt on Government Detergent Laws”