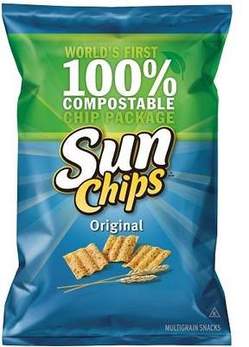 “Frito-Lay aims to quell complaints about SunChips bags by dumping the new bags for the old packaging.” Source of caption and photo: online version of the Omaha World-Herald article cited below.

The Omaha World-Herald ran a similar article to the WSJ article quoted below, in which they noted that the noisy Sun Chip bags are made from Inego which is a plastic made from corn at a Cargill facility in Blair, Nebraska.

(p. B8) Frito-Lay, the snack giant owned by PepsiCo Inc., says it is pulling most of the biodegradable packaging it uses for its Sun Chips snacks, following an outcry from consumers who complained the new bags were too noisy.

Touted by Frito-Lay as 100% compostable, the packaging, made from biodegradable plant material, began hitting store shelves in January. Sales of the multigrain snack have since tumbled.
. . .
Consumers have posted videos on the Web poking fun at the new bags and lodged fierce complaints on social-networking sites. Since January, year-on-year sales of Sun Chips have decreased each month, according to SymphonyIRI, a Chicago market-research firm that tracks sales at retailers.