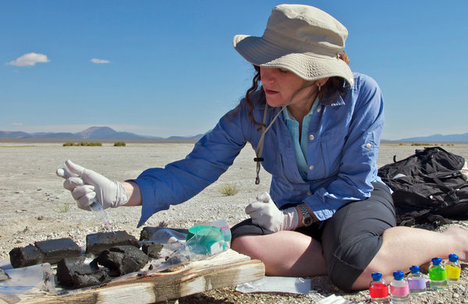 “Felisa Wolfe-Simon takes samples from a sediment core she pulled up from the remote shores of 10 Mile Beach at Mono Lake in California.” Source of caption and photo: online version of the NYT article quoted and cited below.

(p. A1) Scientists said Thursday that they had trained a bacterium to eat and grow on a diet of arsenic, in place of phosphorus — one of six elements considered essential for life — opening up the possibility that organisms could exist elsewhere in the universe or even here on Earth using biochemical powers we have not yet dared to dream about.

The bacterium, scraped from the bottom of Mono Lake in California and grown for months in a lab mixture containing arsenic, gradually swapped out atoms of phosphorus in its little body for atoms of arsenic.
Scientists said the results, if confirmed, would expand the notion of what life could be and where it could be. “There is basic mystery, when you look at life,” said Dimitar Sasselov, an astronomer at the Harvard-Smithsonian Center for Astrophysics and director of an institute on the origins of life there, who was not involved in the work. “Nature only uses a restrictive set of molecules and chemical reactions out of many thousands available. This is our first glimmer that maybe there are other options.”
Felisa Wolfe-Simon, a NASA astrobiology fellow at the United States Geological Survey in Menlo Park, Calif., who led the experiment, said, “This is a microbe that has solved the problem of how to live in a different way.”
This story is not about Mono Lake or arsenic, she said, but about “cracking open the door and finding that what we think are fixed constants of life are not.”
. . .
(p. A4) Caleb Scharf, an astrobiologist at Columbia University who was not part of the research, said he was amazed. “It’s like if you or I morphed into fully functioning cyborgs after being thrown into a room of electronic scrap with nothing to eat,” he said.
Gerald Joyce, a chemist and molecular biologist at the Scripps Research Institute in La Jolla, Calif., said the work “shows in principle that you could have a different form of life,” but noted that even these bacteria are affixed to the same tree of life as the rest of us, like the extremophiles that exist in ocean vents.
“It’s a really nice story about adaptability of our life form,” he said. “It gives food for thought about what might be possible in another world.”