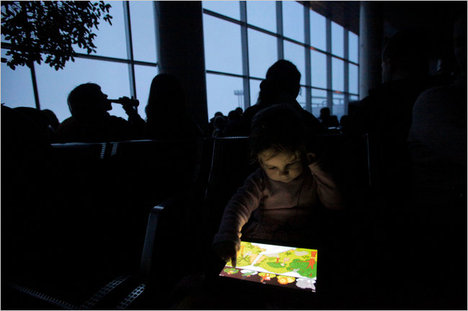 “Steven P. Jobs has played a significant role in a string of successful products at Apple, including the iPad, shown above, which was introduced last year.” Source of caption and photo: online version of the NYT article quoted and cited below.

(p. B1) Shortly before the iPad tablet went on sale last year, Steven P. Jobs showed off Apple’s latest creation to a small group of journalists. One asked what consumer and market research Apple had done to guide the development of the new product.

“None,” Mr. Jobs replied. “It isn’t the consumers’ job to know what they want.”
For years, and across a career, knowing what consumers want has been the self-appointed task of Mr. Jobs, Apple’s charismatic co-founder. Though he has not always been right, his string of successes at Apple is uncanny. His biggest user-pleasing hits include the Macintosh, the iMac, iBook, iPod, iPhone and iPad.
But as he takes a medical leave of absence, announced on Monday, the question is: Without him at the helm, can Apple continue its streak of innovation, particularly in an industry where rapid-fire product cycles can make today’s leader tomorrow’s laggard?
. . .
(p. B4) With the iPad tablet, Apple jump-started a product category. But with the iPod (a music and media player) and iPhone (smartphone), Apple moved into markets with many millions of users using rival products, but he gave consumers a much improved experience.
“These are seeing-around-the-corner innovations,” said John Kao, an innovation consultant to corporations and governments. “Steve Jobs is totally tuned into what consumers want. But these are not the kind of breakthroughs that market research, where you are asking people’s opinions, really help you make.”
Regis McKenna, a Silicon Valley investor and marketing consultant, said employees at Apple stores provide the company with a powerful window into user habits and needs, even if it is not conventional market research.
“Steve visits the Apple store in Palo Alto frequently,” said Mr. McKenna, a former consultant to Apple.
. . .
In a conversation years ago, Mr. Jobs said he was disturbed when he heard young entrepreneurs in Silicon Valley use the term “exit strategy” — a quick, lucrative sale of a start-up. It was a small ambition, Mr. Jobs said, instead of trying to build companies that last for decades, if not a century or more.
That was a sentiment, Mr. Jobs said, that he shared with his sometime luncheon companion, Andrew S. Grove, then the chief executive of Intel.
“There are builders and traders,” Mr. Grove said on Tuesday. “Steve Jobs is a builder.”