(p. A5) When it set up its bulb program in 2006, PG&E Corp. thought its customers would buy 53 million compact fluorescent bulbs by 2008. It allotted $92 million for rebates, the most of any utility in the state. Researchers hired by the California Public Utilities Commission concluded earlier this year that fewer bulbs were sold, fewer were screwed in, and they saved less energy than PG&E anticipated.

As a result of these and other adjustments, energy savings attributed to PG&E were pegged at 451.6 million kilowatt hours by regulators, or 73% less than the 1.7 billion kilowatt hours projected by PG&E for the 2006-2008 program.
One hitch was the compact-fluorescent burnout rate. When PG&E began its 2006-2008 program, it figured the useful life of each bulb would be 9.4 years. Now, with experience, it has cut the estimate to 6.3 years, which limits the energy savings. Field tests show higher burnout rates in certain locations, such as bathrooms and in recessed lighting. Turning them on and off a lot also appears to impair longevity. 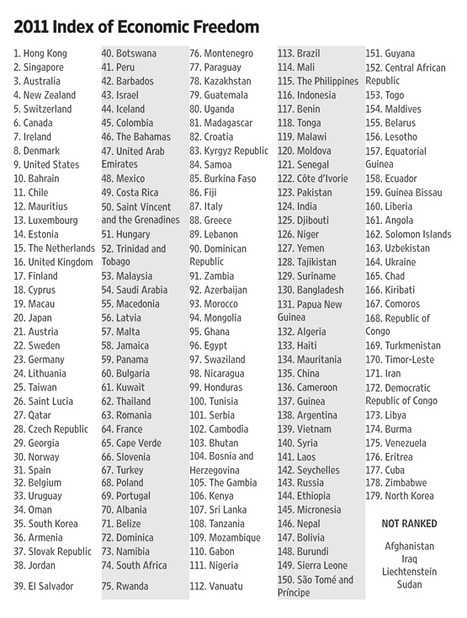 Source of table: online version of the WSJ article quoted and cited below.

(p. A15) Riots in Greece and France! An IMF bailout for Ireland! The Euro under threat! A new government in London! Tea parties in America! Is it the end of capitalism? Many were predicting just that last year.

The 2011 Index of Economic Freedom, released today by the Heritage Foundation and The Wall Street Journal, tells a different story. The Index records countries’ commitment to the free enterprise/capitalist system by measuring 10 categories of economic freedom: fiscal soundness and openness to trade and investment, government size, business and labor regulation, property rights, corruption, monetary stability and financial competition.
The good news this year? One hundred and seventeen countries, mainly developing and emerging market economies, improved their scores, and the average level of economic freedom around the world improved by about a third of a point on the Index’s 0 to 100 scale.
. . .
For the U.S. and the U.K., the Index of Economic Freedom confirms what those countries’ voters already knew, that there is an urgent need for real change. The U.S. dropped to ninth place in the 2011 Index from eighth (its lowest economic freedom score in a decade), and the UK fell all the way to 16th place from 11th.

(p. 223) Though power looms had existed, at least in concept, for centuries (under his sketch for one, Leonardo himself wrote, “This is second only to the printing press in importance; no less useful in its practical application; a lucrative, beautiful, and subtle invention”), there was little interest in them so long as virtually all the available yarn could be turned into cloth in cottages. This fact reinforced the weaver’s independence; but it also encouraged another group of innovative types who were getting ready to put spinning itself on an industrial footing. 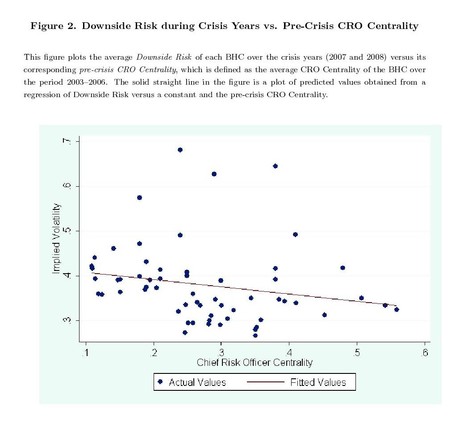 Source of graph: screen capture from p. 43 of NBER paper referenced below.

At the American Economic Association meetings in Denver from January 6-9, I attended several sessions dealing the causes and cures of the economic crisis of the last few years.
One issue that came up more than once was whether, and to what extent, various decision makers were blameworthy in what happened. Was this a crisis that well-trained, hard-working and prudent managers, regulators and legislators should have seen coming? Or was it a once in 100 year storm that nobody should be expected to have foreseen?
One compelling bit of evidence was presented in a talk on January 8th by Charles Calomiris in which he presented a graph from a 2010 NBER paper by Ellul and Yerramilli. The graph, shown above, indicates that firms that took risk seriously, as proxied by their giving an important pre-crisis role to a Chief Risk Officer (CRO), tended to suffer less downside volatility during the crisis.

(p. 78) . . . the intelligence of humans, though immensely strengthened by articulation, nonetheless contains a large component of tacit understanding by individuals who know more than they can say. If this is also true with respect to the sorts of knowledge relevant to our economic activities, then no comprehensive planning agency could obtain the sort of knowledge necessary for economic planning, for it would lie buried deep in the minds of millions of persons. 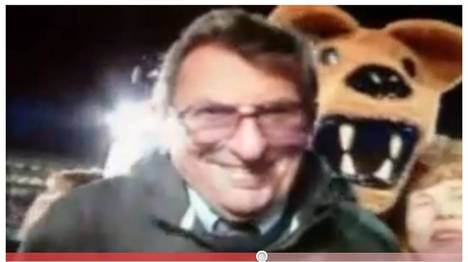 Source of image: screen capture from YouTube clip referenced below.

What motivates employees? Economists have emphasized pay as the primary incentive, while recognizing that there may be “compensating differentials” for aspects of the work that are pleasant or unpleasant.
In recent years many non-economists, such as Daniel Pink in Drive, have emphasized non-pecuniary incentives.
Joe Paterno entered the debate at age 83, after he became the first major college coach to win 400 games on November 6, 2010.
Right after the victory, he was interviewed on the field by “Heather” of ESPN. Starting at 1:33 seconds into the clip referenced below, here is the key dialogue:

Heather: “Coach Paterno, what has motivated you to get to this point?”

Source: YouTube clip at http://www.youtube.com/watch?v=jQzdVeYtm5w
(Note: the clip was posted on 11/6/10 by shellymic and has the title “Joe Pa FIRST to 400 Wins!”)

(p. 223) Kay’s flying shuttle made it possible for weavers to produce a wider product, which they called “broadloom,” but doing so was demanding. Weaving requires that the weft threads be under constant tension in order to make certain that each one is precisely the same length as its predecessor; slack is the enemy of a properly woven cloth. Using a flying shuttle to carry weft threads through the warp made it possible to weave a far wider bolt of cloth, but the required momentum introduced the possibility of a rebound, and thereby a slack thread. Kay’s invention still needed a skilled artisan to catch the shuttle and so avoid even the slightest bit of bounce when it was thrown across the loom.