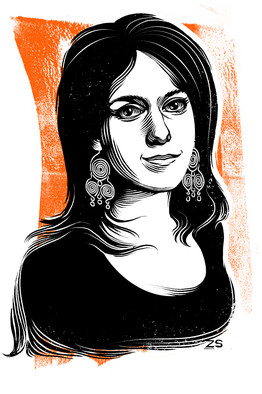 Madeleine Sackler. Source of image: online version of the WSJ article quoted and cited below.

(p. A13) ‘What’s funny,” says Madeleine Sackler, “is that I’m not really a political person.” Yet the petite 27-year-old is the force behind “The Lottery”–an explosive new documentary about the battle over the future of public education opening nationwide this Tuesday.

In the spring of 2008, Ms. Sackler, then a freelance film editor, caught a segment on the local news about New York’s biggest lottery. It wasn’t the Powerball. It was a chance for 475 lucky kids to get into one of the city’s best charter schools (publicly funded schools that aren’t subject to union rules).

“I was blown away by the number of parents that were there,” Ms. Sackler tells me over coffee on Manhattan’s Upper West Side, recalling the thousands of people packed into the Harlem Armory that day for the drawing. “I wanted to know why so many parents were entering their kids into the lottery and what it would mean for them.” And so Ms. Sackler did what any aspiring filmmaker would do: She grabbed her camera.
. . .
But on the way to making the film she imagined, she “stumbled on this political mayhem–really like a turf war about the future of public education.” Or more accurately, she happened upon a raucous protest outside of a failing public school in which Harlem Success, already filled to capacity, had requested space.
“We drove by that protest,” Ms. Sackler recalls. “We were on our way to another interview and we jumped out of the van and started filming.” There she discovered that the majority of those protesting the proliferation of charter schools were not even from the neighborhood. They’d come from the Bronx and Queens.
“They all said ‘We’re not allowed to talk to you. We’re just here to support the parents.'” But there were only two parents there, says Ms. Sackler, and both were members of Acorn. And so, “after not a lot of digging,” she discovered that the United Federation of Teachers (UFT) had paid Acorn, the controversial community organizing group, “half a million dollars for the year.” (It cost less to make the film.)
Finding out that the teachers union had hired a rent-a-mob to protest on its behalf was “the turn for us in the process.” That story–of self-interested adults trying to deny poor parents choice for their children–provided an answer to Ms. Sackler’s fundamental question: “If there are these high-performing schools that are closing the achievement gap, why aren’t there more of them?”

For the full interview, see:
BARI WEISS. “THE WEEKEND INTERVIEW; Storming the School Barricades; A new documentary by a 27-year-old filmmaker could change the national debate about public education.” The Wall Street Journal (Sat., JUNE 5, 2010): A13.
(Note: ellipsis added.)
(Note: the first paragraph quoted above has slightly different wording in the online version than the print version; the second paragraph quoted is the same in both.)